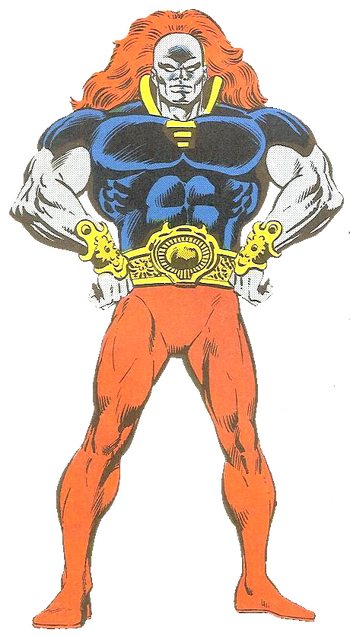 Tryco Slatterus, better known as the Champion of the Universe is one of the Elders of the Universe, one of the oldest beings in the universe, and the last remaining member of his race, which was among the first to evolve after the Big Bang.

Classification: Elder of the Universe, the last of his species

Powers and Abilities: Superhuman Physical Characteristics, Master Martial Artist (Has mastered countless forms of combat from all across the universe), Regeneration, Immortality (Types 1, 3, and 4; is banned from death by Death herself)

Lifting Strength: At least Stellar (Could not be restrained by the Hulk and multiple other superheroes.)

Intelligence: Average, but he has mastered countless styles of combat and martial arts from all over the universe.

Weaknesses: Without the Power Gem, the Champion's physical strength and stamina are only a fraction of what they once were. Sometimes written as an easily manipulated brute, who enjoys slaughtering planetary populations for sport, or start wars to have them slaughter each other. Originally written to strictly stick to the rules of his competitions. Cannot fly on his own. Without the banishment, his continued existence could depend upon his self-obsession and it would also then be possible for him to sustain fatal injuries

Start a Discussion Discussions about The Champion of the Universe