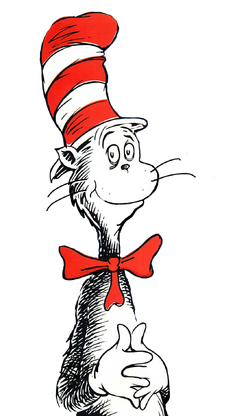 The Cat in the Hat, also called simply The Cat, is the iconic character from the works of Dr Seuss.

Tier: 10-B physically, 9-B with equipment, possibly higher with VOOM

Name: The Cat in the Hat, The Cat

Attack Potency: Human level physically, Wall level with equipment (Includes various vehicles and inventions, which would have this tier), possibly higher with VOOM (VOOM cleared an entire lawn of pink icing; note that the average lawn in Massachusetts (the state where Seuss had came up with the idea of The Cat in the Hat) is 14,809 square feet, or 1375.8011 square meters)

Speed: Superhuman physically (Was described to move as quick as a fox), Superhuman with equipment (Equipment includes cars that are this fast)

Note: This profile is the canon version of The Cat in the Hat as he appears in the books written directly by Theodor Geisel (aka Dr. Seuss) and the animated TV specials Geisel had direct control in.

Start a Discussion Discussions about The Cat in the Hat (Canon)