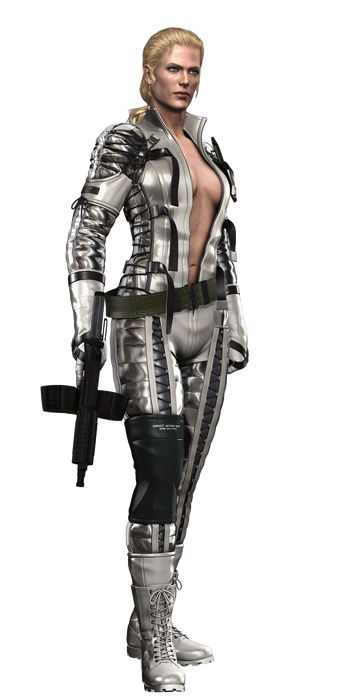 The Boss, also known as The Joy, The Mother of Special Forces, Mercury Lady and Voyevoda (Russian: Воевода, "Warlord"), was a renowned American female soldier, founder and leader of the Cobra Unit, the biological mother of Ocelot, and mentor and mother figure to Naked Snake. In June 1944, during World War II, she led the Cobra Unit to victory at the Battle of Normandy. Together with Naked Snake, she developed the technique of CQC.

Name: The Boss, The Joy, The Mother of Special Forces, Mercury Lady, Voyevoda

Stamina: Very high (Survived being severely burned by both the cosmic radiation, and the heat of re-entry of the capsule in the Mercury Project)

Intelligence: Genius. An extremely skilled and trained soldier, who learned from her father the most forbidden secrets of the Philosophers and always completed all her missions no matter the risks or the outcome. She also trained Naked Snake and taught him all of her knowledge in CQC, firearms, etc. Lastly, she made sure that he would carry out his mission by fighting her for the title of Big Boss and make the world one again.

Weaknesses: Can be stunned by flash/stun grenades if aimed correctly.

Start a Discussion Discussions about The Boss (Metal Gear)