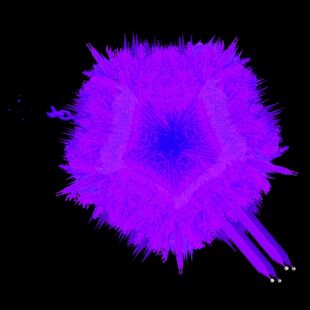 The Black Kingdom of Derse is one of the two kingdoms in the Incipisphere, Derse wages unending war against The White Kingdom of Prospit striving for Skia's destruction. Derse has always been destined to defeat Prospit which forces Sburb players to kill the Black King on their own to prevent Skaia's destruction by The Reckoning.

Name: The Black Kingdom of Derse

Age: Unknown, has existed sense the beginning of The Medium

Population: At least a Billion

Power Absorption (They share the powers of the Kernalsprites and gain new ones as the sprite continues to get Prototyped throughout the session), Fusionism (They are partially fused with whatever gets prototyped in the session), Weapon Mastery, Martial Arts, Large Size (Type 1, Ogres only), Preparation, Can gain Spatial Manipulation, Teleportation, Acausality (Type 1), Extrasensory Perception, Resistance to Heat, Radiation, and Time Stop (Gained a majority of scaled down versions of Becquerel's abilities after being prototyped with him), Mind Manipulation, Flight, Enhanced Senses (Troll Session Imps gained traits from all of the prototyped Lusi), possibly Time Manipulation, Hammerspace, Duplication, Telepathy, Afterimage and 4th Wall Awareness (Should potentially have all of pre-God God Tier Dave and Jade thanks to being prototyped with versions of them), can potentially gain many, many more

Varies widely by session, they share the same Aspect and powers thusly associated as their assigned players. Can have Time powers (Time Stop, Time Travel and Summoning of Time clones), Breath Powers (Can create huge gusts of wind and likely even tornados, as John could while vastly weaker. Can dissipate into wind and reform), Tar Manipulation, Soul Manipulation (Heart denizens could possibly remove and destroy souls like Dirk can), Void Manipulation (Existence Erasure, the creation of objects via "stealing" nothing, the obscuring of data and information and being irrelevant to the plot), Life Manipulation (Healing and resurrection of allies), Hope Powers (Can strengthen themselves and allies via simply believing that they can succeed), Space Powers (Size Manipulation, Matter Manipulation and Teleportation), Blood Powers (manipulation of the bonds between individuals, Social Influencing), Light Powers (Clairvoyance, Precognition and Probability Manipulation), Mind Powers (Tactical Genius, Precognition), Rage Powers (Rage Power, Berserk Mode and potentially the power to instill and grant both to others), Doom Powers (Precognition, possibly Curse Manipulation), Wish Granting

Attack Potency: At least Wall level (The weakest can be defeated simply by dropping a refrigerator on them, they can, however, survive being tossed through walls), up to Large Mountain level to Island level (Stronger soldiers such as Ogres, can actively threaten most Players) | Large Mountain level to Island level (An alternate version of Jack Noir was able was capable of easily slaughtering hordes of large monsters and they should be comparable to other Arch-Agents) | Multiverse level+ (Facing one before going God-Tier is considered suicide and the strongest known Denizen, Yaldabaoth, gave Caliborn a good fight) | Unknown, at least Large Star level in Base (Shouldn't be weaker than any of their Arch-Agents), up to Multiverse level+ with rings (Should be vastly stronger than their Denizens, Troll Session Black King fought a team with several God Tiers in it).

Industrial Capacity: The Kingdom of Derse is capable of funding a nigh-indefinite millennia long war with the Kingdom of Prospite sense its inception without any negative impacts to its economy. Sense the very creation of The Medium, Dersites have waged war equally with their creation loving counterparts and remained stalemated. Through Prototyping, their ability has only furthered, allowing them to inevitably defeat Prospit in every single session and fall just short of destroying Skaia and preventing the creation of the next Universe. Most Sessions end in failure, with the would be Gods overrun, outskilled, and outnumbered by Derse's massive output of warriors and destroyers.

Military Prowess: At least Millions, up to Billions.

Notable Individuals: The Black King and Queen, The Arch-Agents.

Weaknesses: It's focus is entirely based on the total destruction of all known creation and its government is notoriously corrupt. The Denizens hold no particular loyalty to Derse, and will happily train Players how to master their abilities to further their own agendas. The Arch-Agents, Jack Noir in particular, have willingly betrayed Derse for their own ends numerous times and can easily be persuaded to help assassinate the King and Queen. The Queen is overly vain and will refuse to wear the ring if it transforms her into a form she doesn't like, for example, a frog.

Retrieved from "https://vsbattles.fandom.com/wiki/The_Black_Kingdom_of_Derse?oldid=5656913"
Community content is available under CC-BY-SA unless otherwise noted.