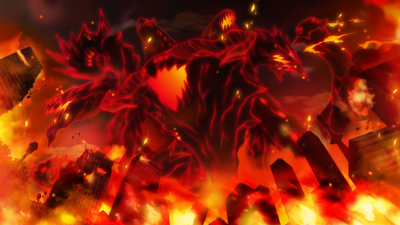 The Black Beast is a legendary beast made of a high concentration of seithr responsible for the calamity and destruction caused before the events of BlazBlue: Calamity Trigger and is one of the major antagonists of the BlazBlue series, in particular to the Six Heroes. It is a being outside of reason. Different beasts appeared in different timelines and different worlds.

Superhuman Physical Characteristics, Self-Sustenance (type 1, 2 and 3; lacks the need to for sustenance due to being a creature made of seithr), Acausality (Type 1; Is unaffected by the effects from a Phenomena Intervention, which can reset an entire timeline), Immortality (Type 1, 2, 3, 4, and 8; is able to Observe itself, which allows itself to regenerate and resurrect from fatal attacks, is also reliant on its heart to be intact for it to stay alive), Regeneration (Mid-High; likely High; Can regenerate as long as seithr exists. High-Godly with Resurrection; Scales from Terumi's Self Observation, who was capable of regenerating from Hakumen's Time Killer, which is superior to the cauldron's Existance erasure, which can erase someone from the past, present and future), Non-Physical Interaction (the Azure, a part of the black beast itself, can hit Izanami), Resurrection (Via Self-observation), Invulnerability (Is immune to conventional weaponry due to existing outside of Logic), Duplication, Weather Manipulation, Earth Manipulation, and Air Manipulation (Is capable of messing with the seasons to the point that some seasons can last much longer than normal, mess with the air current and weaken the soil via Seithr as stated in Phase Shift), Heat Manipulation (Can emit extreme heat with it presence), Energy Manipulation, Darkness Manipulation, Teleportation (Can teleport through anywhere that has seithr), Life Manipulation (Is Seithr itself, which can give a seed life and sentience), Pocket Reality Manipulation, Creation and Sealing (Its psyche is portrayed as pocket dimension and trapped CP Ragna there for two years while fighting seemingly endless amount of dogs made out of seithr), Soul Manipulation, and Healing Negation (Azure Grimoire, a part of itself, can damage the soul, negating any form of recovery, even when the reality is warped by multiversal entity), Technology Manipulation (Seithr itself is capable of messing with the technology of the NOL and sector seven), Extrasensory Perception (Can sense beings with seithr as stated in Phase Shift), Size Manipulation (Can grow in size as stated in Phase Shift), Empathic Manipulation, Paralysis Inducement (Black Beast can paralyze anyone within its vicinity), Poison Manipulation, Madness Manipulation, Biological Manipulation and Statistics Reduction (Is made of Seithr, which is poisonous, can induce addiction and deteriorate bodies, as well as reducing the power of others), Absorption (Capable of absorbing bodies and souls), Intangibility (Can turn into mist), Time Manipulation, Memory Manipulation, Information Manipulation, Chaos Manipulation, Mind Manipulation, Corrosion Inducement, Transmutation, Existence Erasure/Void Manipulation and Corruption (Type 3) (Is stated to be a cauldron gone haywire, and Cauldrons are capable of these abilities), All of Arakune's Abilities (Due to him being the Black Beast's copy), Immortality Negation (1, 2, 3, 4, 5, 6, 7, 8, and 9), and Regeneration Negation (Up to High-Godly [Scales from Ragna's Azure, who with its power was able to Erase Terumi in the Azure Horizon, kill Naoto more than once during Bloodedge, and is capable of killing Arakune]), BFR (Scales from Black Beast Ragna, who sent Noel to the Gate after consuming her), and Deconstruction (Turned a bunch of soldiers to dust with its presence during the events of Phase Shift)

Resistant to the Following: Poison Manipulation, Madness Manipulation, Biological Manipulation and Statistics Reduction (Everybody can resist Seithr to some extent which is poisonous, can induce addiction and deteriorate bodies, as well as reducing the power of others), Phenomena Intervention (Due to being outside of Logic, it's resistant to phenomena intervention), Mind Manipulation (Able to resist the boundary/cauldron, which when entered or get closed, will result in taking infinite information, dating across beginning of time and all possibilities), Law Manipulation, Water Manipulation, Earth Manipulation, Fire Manipulation, Air Manipulation, Darkness Manipulation and Light Manipulation (Exists outside of Logic, the fundamental rules of the world, which includes the 4 elements and two great origins), Soul Manipulation, and Healing Negation (Is capable of fighting against the Six Heroes with the Nox Nyctores, which can inflict soul damage beyond the help of a multiversal entity, and negate any form of Recovery), Void Manipulation and Corruption (Type 3) (Can resist the effects of the boundary, which can erase those that enters it, and corrupt them beyond recovery in a similar fashion to what happened to Arakune), Corrosion Inducement (Resists getting corroded by the Cauldron), Paralysis Inducement (Can fight Hakumen without getting paralyzed), Radiation Manipulation (Can cancel out radioactive materials with seithr, making it ineffective against the toxic substance), and Chaos Manipulation (Resist the Boundary which turns everything into a spiraling chaos)

Attack Potency: Large Planet level (Among the strongest beings of the BlazBlue world, strong enough that it took the efforts of heroes like Hakumen to defeat. In one of Ragna's bad endings, in which he lost control of the Black Beast, it destroyed the entire world, though the details of this occurrence are unknown). Able to ignore conventional durability in variety of ways.

Speed: At least FTL (Can at least keep up with Hakumen, if not match his speed, reacted to Gigant: Take-Mikazuchi's attacks)

Durability: Large Planet level (Can withstand several nuclear warheads without a scratch; the Six Heroes had trouble keeping it down). Resurrection, Immortality and Regeneration make it difficult to kill.

Range: Hundreds of meters with melee, higher with energy attacks. Planetary with seithr manipulation, Multiversal+ with BFR (Scales from Ragna's Black Beast, which was capable of sending Noel to the Gate of the Azure, a place located in the deepest reaches of the Boundary)

Intelligence: Unknown (Seemingly kills and destroys without rhyme or reason, yet was able to develop a strategy to outsmart the Take-Mikazuchi)

Weaknesses: People who exist outside of Logic, or that have extremely powerful magic can harm it effectively. Its berserker-like mindset can cloud its judgment.

Start a Discussion Discussions about The Black Beast