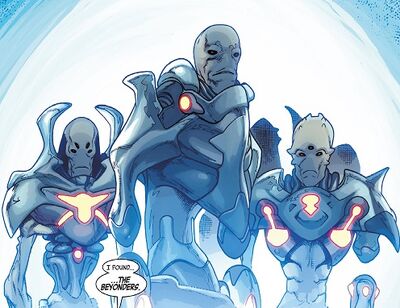 The Beyonders are a race of immensely powerful entities who exist outside of the Marvel multiverse. Among other things, they are responsible for creating the cosmic cubes, and the Savage Land, and kidnapped the High Evolutionary's first Counter-Earth for study. They also created the Molecule Man as a device to destroy the Marvel multiverse.

Names: The Beyonders; The Ivory Kings

Classification: Cosmic Enties, Abstract Entites from Outside the Multiverse, Creators of the Savage Land, and Cosmic Cubes, such as the Beyonder (described as their "child unit")

Speed: Massively FTL+ | Immeasurable, Omnipresent within the Beyond Realm

Durability: Solar System level (Starbrand was able to kill one of them by detonating his entire body) | Low Outerverse level

Weaknesses: Hold comparatively very little intelligence and Cosmic Awareness when compared to other Cosmic Beings, most likely because their sheer power never required them to depend on intellect.

In lack of better options, we consider the Beyonders being killed by an explosion sufficient to destroy 100,000 universes as outlier.

Similarly, also for a lack of better options, we treat their statement as being "Temporally linear" as a contradictory Outlier. As in Marvel even universal abstracts display transcendence over linear time, and it makes no logical sense for beings who exist outside the entire multiverse and who killed The Living Tribunal to be temporally linear.

In addition, even Tom Brevoort has admitted that The Beyonders' defeat had nothing to do with character powers. As such, their defeat by The Avengers is simply Plot-Induced Stupidity.

Start a Discussion Discussions about The Beyonders