VS Battles Wiki
Register
Don't have an account?
Sign In
Advertisement
in: Tier 9, Tier 9-B, Tier 4,
and 61 more

The Batman Who Laughs 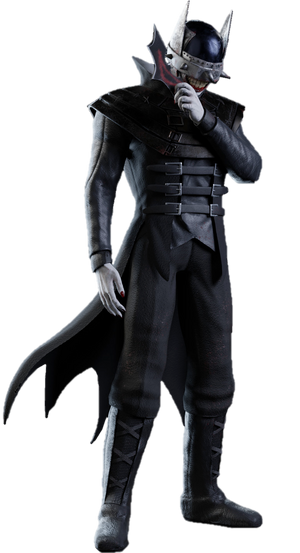 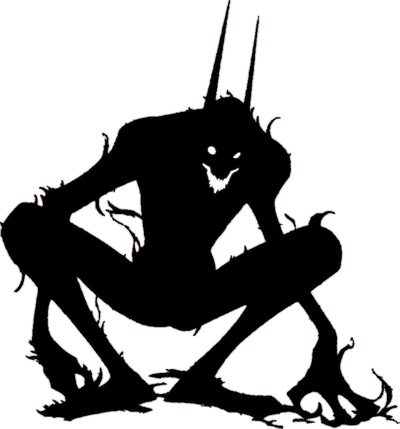 On Earth -22, the Joker's insane rampage across Gotham City caused Batman to finally snap, breaking his long-held creed to never take a life, snapping the Clown Prince of Crime's neck to end the threat he posed once and for all. Unbeknownst to him, this released a special strain of Joker Venom that Batman inhaled, slowly twisting his moral fiber until he was no different from the Joker himself.

After slaughtering his own family and dismantling the entirety of the Justice League, he proceeded to wage war on all of creation, methodically killing every last man, woman, and child on Earth. Now known as The Batman Who Laughs, he serves as the favored lieutenant of Barbatos, seeking to plunge the entire multiverse into eternal darkness as he had done with his own world.

Superhuman Physical Characteristics, Weapon Mastery, Genius Intelligence, Preparation, Master Hand-to-Hand Combatant, Reality Warping with Dark Metal Cards (The cards he distributed are able to fulfill the holder's desires, converting large sections of Gotham City into nightmarish forms of the preferred domains of Batman's greatest rogues), Corruption (Type 1; With his batarangs, he can infect people and turn them into something similar to the Batman Who Laughs), Magic (Learned dark magic capable of caging and killing the Dark Multiverse Spectre of his world), Mind Manipulation, Morality Manipulation, Poison Manipulation, and Status Effect Inducement with Joker Venom. Resistance to Sleep Manipulation, Physical and Energy Attacks (The denizens of the Dark Multiverse cannot be harmed by physical or energy attacks by beings of similar power levels. Regular superheroes need divine metals to injure them)

All previous abilities to a much greater degree, plus: Reality Warping (Can create and destroy worlds), Nigh-Omniscience, Cosmic Awareness (Possesses an understanding of the workings of the universe on a cosmic scale; He is able to feel the Dark Multiverse as if it were a part of him),Mind Manipulation (shown here), Precognition (Can look into the future of his own timeline, as well as the future of every Batman of the Dark Multiverse), Matter Manipulation (Macro-Quantum level), Mind Manipulation (Restored the Robin King's mind from his Groblin transformation), Duplication (Can duplicate himself), Deconstruction (Can take apart inanimate objects and living beings), Creation (Created a world to trap the Speedsters in), Absorption (Can absorb energy), Telekinesis (Shown here), Dimensional Travel (Can traverse between the various realities in the multiverse as well as reach into these worlds at will), Energy Manipulation (Is full of Connective Energy, which represents all the positive power of creation; Possesses the energy of every Crisis in history), Regeneration (High; Batmanhattan reintegrated his body's molecules after he was disintegrated), Immortality (Type 1 and 3), Inorganic Physiology (Is a being made out of energy), Self-Sustenance (Type 1, 2 and 3), Electricity Manipulation and Conceptual Manipulation (Finds cracks in the Speed Force and corrupts it), Spatial Manipulation, Time Manipulation, Higher-Dimensional Manipulation (Created the Last 52 Multiverse), Technology Manipulation (Has rigged the Mobius Chair to redirect all the Crisis Energy to him instead of Wally West), Superhuman Speed (Can closely keep up with Barry Allen, Wally West, and Jay Garrick, when chasing them down), Summoning (Teleported his Dark Multiverse army of zombie Flashes behind Barry Allen, Wally West, and Jay Garrick to chase them down), Size Manipulation (Can enlarge himself to the size of several planets and holds the sun in his hand), Shapeshifting (Can restructure and alter his appearance), Power Nullification (depowered the Titans), Sealing (Shown here)

Attack Potency: Wall level (Traded blows with the main universe Batman and is biologically identical to him). Solar System level with weaponry (Knocked out Wonder Woman with an Eighth Metal gun). Unknown with preparation time (Possesses a guide on how to destroy the Multiverse along with Multiversity, killed the "Wrath of God", better known as The Spectre, off-panel. However, the latter's power level varies to a massive degree from story to story) | Unknown (Stole the body of a duplicate Doctor Manhattan, though it was never confirmed if he possessed the same powers as the original) | At least Low Complex Multiverse level (After absorbing the energy of every Crisis in history, the Darkest Knight caused reality to quake, the possibilities of Hypertime to die out and the last denizens of the Sphere of Gods to shudder at his power. His clash with Perpetua raged across every facet of reality and could collapse the Multiverse and was tearing apart the 5-D Bleedspace), possibly Outerverse level (Claimed that he can kill The Hands, though he admitted that he could not stop them if they were to destroy the Multiverse)

Intelligence: Extraordinary Genius. As the Batman of Earth -22, The Batman Who Laughs' intellect is only matched by his fiendish cunning and pragmatic ruthlessness. Now completely unhinged and free of any moral fiber to dictate his choices, he was able to single-handedly wage war on the entire world, wiping out the entire Justice League with ease and even killing cosmic entities like The Spectre in his rampage. As the most trusted lieutenant of Barbatos, he is privy to all of the evil god's plans, successfully playing the Justice League of Earth-0 for fools and causing them to do everything he needed to fulfill his goal of destroying the multiverse until they obtained the Tenth Metal. Aside from his terrifying intellect and stratagem, he retains his status as one of the finest hand-to-hand combatants on Earth, overwhelming his Prime Earth counterpart until the latter received help from his own version of the Joker. While he is absolutely insane, it doesn't hinder his monumental intellect in virtually any way. | Nigh-Omniscient. The Batman Who Laughs perceives time in a non-linear fashion. This means that he sees the past, present, and future simultaneously. His powers allow him to view everything throughout time as well as the workings of the multiverse. The Batman Who Laughs is also aware of every Batman from the Dark Multiverse, and was able to pull aspects of the most terrifying and vicious of them, including their skills and experiences, and stitch them into his own mind.

Weaknesses: Due to Earth -22's citizens vibrating at an opposite cosmic frequency to Nth Metal, his body is badly damaged upon contact with it | None notable