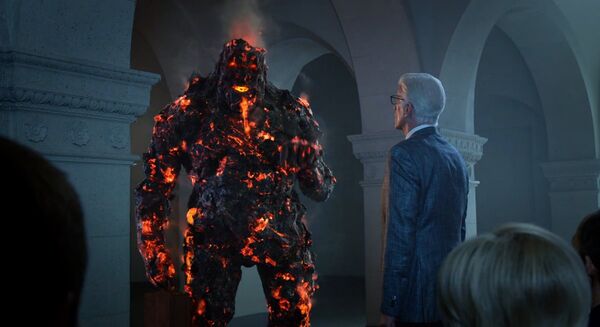 The Bad Place is the most common afterlife for mortal beings to go to when they die. It is inhabited by countless merciless demons who enjoy torturing humans.

Civilization Type: At least Multiversal Civilization (Civilian vehicles in The Bad Place are capable of "Interdimensional" travel and they were shown as having access to multiple normal timelines as well)

Kardashev Level: Type VII (Demons of the bad place consume time itself as an object and as such 3-D energy has no real meaning to them)

Age: As old as time itself, and technically infinite as time is not a straight line in the bad place

Population: Unknown, but apparently large enough to have more demons that mortal beings who have died

Attack Potency: At least Universe level+, likely far higher (Michael was capable of casually creating an entire universe with his own magical abilities and he is one of the weakest architects, who are far from being the strongest demons themselves)

Industrial Capacity: Unknown, although demons can manipulate matter on their own

Military Prowess: While they have never had a need for an actual fight, Demons are fully capable of maintaining security and fighting against lesser beings when needed, and The Bad Place headquarters has heavy security.

Retrieved from "https://vsbattles.fandom.com/wiki/The_Bad_Place?oldid=5209058"
Community content is available under CC-BY-SA unless otherwise noted.