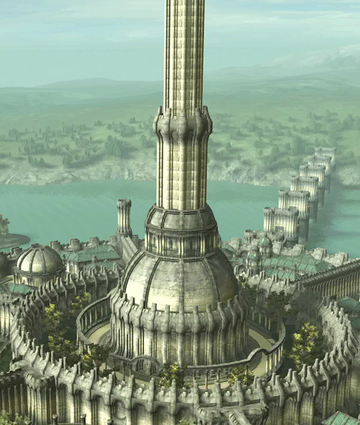 The Ayleids, also known as The Heartlanders or the Heartland High Elves, were a group of elves who split off from the Aldmer during the Merethic Era, derparting from their home in the Summerset Isles and leaving for the mainland of Tamriel. They established themselves as a collective of splintered cultures along the jungled central and southwest lands of the continent that had been previously discovered and charted by the Aldmeri explorer Topal the Pilot. The lands received the name of "Cyrod", meaning Heartland in their Ayelidoon language, and together formed the first empire to ever arise in Tamriel. At the very heart of Cyrod they erected the White-Gold Tower, a metaphysical nexus of creation connected to all realities in Mundus, built in the image of the Aurbic Wheel and thus holding the greatest power of all the Towers built by the Merethic Mer.

During the height of its power, the Ayelidoon Empire stood among the greatest and most advanced societies in all of Tamriel. Ayleid culture placed enormous value and importance on the learning and mastery of magic, as a result it spawned some of the greatest sorcerers in the continent’s history. They believed that the world was composed of four basic elements: Earth, Water, Air, and Light, whose most sublime form was starlight, which brings magic onto the Mortal Plane and forms its connection with Aetherius. As a result, the Ayleids were pioneers in the art of celestial mining, sailing to the heavens on airships to harness the very stuff of the stars. Their religion was eclectic and never truly unified, with each city-state favoring a certain god above all others. They worshiped both Aedra and Daedra without discrimination, and weren’t afraid to form pacts with higher powers if it served their goals.

However, the Ayleids made no distinction between “Good” and “Bad” Daedra within their religion, with numerous cults dedicated to even the most violent and depraved Daedric Princes having been widespread among the Empire of Cyrod. As such, the majority of the Heartlanders began to engage in increasingly more debauched and heinous actions, such as torturing their human slaves through the “art-tortures” of wailing wheels, gut gardening, flesh sculpture, and more. Through this, Ayleid culture as a whole went through a slow process of decline, with their arrogance and hubris swelling as their power and influence dwindled. This was to ultimately be their downfall, as the Ayleids fell to a slave rebellion led by a woman named Periff, later crowned as the Slave Queen Alessia, along with the aid of the Divine Crusader Pelinal Whitestrake and the demigod Morihaus Breath-of-Kyne.

Tier: At least 7-B to 6-B with Basic Magicks, up to 4-A for the strongest Wizards and Mages. At least Low 1-C, likely far higher with their most powerful Magic

Civilization Type: Post-Industrial Civilization superficially. Likely a Multiversal, borderline Higher-Dimensional Civilization at the full extent of their Empire (During the late Merethic Era, at the height of their power, the Ayleids' capabilities should have been well above those of the Second Empire established in the First Era, which could colonize the Twin Moons of Nirn, as well as certain planes of Oblivion. Created the White-Gold Tower, a metaphysical construct adjacent to all of Aedric Creation, and which exists detached from Time itself)

Age: Over Thousands of Years. The Ayleidoon Empire seemingly lasted from the middle of the Merethic Era to well into the First Era, and though the main settlement established in the jungles of Cyrod was abolished and taken at the Alessian Slave-Rebellion, several other Ayleid Kingdoms remained in existence for several years before the Alessian Order abolished them as well.

Territory: The Ayleid Empire's dominion spanned across several kingdoms throughout the Heartland of Ald Cyrod, with all City-States having been interconnected by the dimensional nexus known as the Golden Path. The Ayleids were heavily implied to be capable of restructuring the entire Mundus through the White-Gold Tower due to the Mythic Architecture involved in its creation, as well as the high amounts of Creatia constantly harnessed by it, all of which granted the Tower a far greater control over its surroundings than the others present in the face of Nirn. Capable of accessing the Planes of Oblivion and even Aetherius itself, and maintaining temporary territory there.

Attack Potency: At least City level (Given the Ayleids’ natural affinity towards the art of Magic, with them having been responsible for creating the Alteration School itself, their Wizards should be far above minor Mages capable of conjuring Thunderstorms, and the likes of Marien Sellan, who even in a weakened state had enough power to collapse a pocket plane of Oblivion which replicated the entire village of Eagles’ Brook) to Country level (When combined with an Ayleid Spell Scroll, a Sigil Stone was said to have enough power to destroy an entire pocket plane of Coldharbour, and potentially all of Valenwood if combined with the innate magicka present within the Moonhenge, itself a ruin of Ayleid origin) with Basic Magicks, up to Multi-Solar System level for the most powerful Mages and Wizards (The Merethic Ayleids were capable of creating the Golden Path, an entire dimension containing stars and nebulae which acted as a nexus connecting all City-States across their Empire. The most powerful Ayleid Kings were capable of killing a weakened Pelinal Whitestrake upon being driven to "a madness on their own", and the mightiest among them, Umaril the Unfeathered, could do battle with him and break the Divine Crusader's armor with his strikes). At least Low Complex Multiverse level, likely far higher with their most powerful Magic (The Ayleids preserved the magicks and knowledge of the Dawn Era, as well as the unstable language of the Old Ehlnofey, and they were responsible for the creation of the White-Gold Tower, a metaphysical nexus of creation which exists adjacent to all of Time and Space across the Mundus, and actively sustains its existence, preventing the Multiverse from collapsing into the void of Oblivion. King Anumaril, one of the most powerful Ayleid Wizards of the First Era, was capable of creating the Staff of Towers, a timeless artifact capable of unravelling the entire Mundus, detaching it from the Aurbis and removing the influence of the Eight Divines from it, collapsing everything back into the everchanging chaos of the Dawn Era)

Power Source: Ayleids are said to have directly collected "the stuff of the stars" in ages past, and actively harnessed pure magicka in the form of Starlight provenient from the Sun and the Constellations of Oblivion, storing them within magical wells and welkynd-stones. By entering pacts with the Daedric Princes of Oblivion, the Ayleids were able to constantly harvest castaway creatia from the Void through the White-Gold Tower, which alongside the mythitecture involved in its creation, allowed them to reshape their surroundings to a far greater extent than the other Towers across Nirn.

Industrial Capacity: The Ayleids could directly harness minerals and precious metals from Aetherius itself through airships, constantly employing them into their construction practices and architecture. At the height of their power, the Ayleids constructed the White-Gold Tower, a metaphysical nexus which encompassed all of the Mundus, and were also implied to be the original creators of the Amulet of Kings, said to be a crystallized drop of blood from the Heart of Lorkhan itself.

Military Prowess: Aside from their own armies of warriors and powerful magicians, many kingdoms of Ayleids continuously made numerous pacts with Daedric Princes, who provided them with legions of Daedra and spirits of the dead to aid the Elves in their conquests and subjugations.

Weaknesses: Due to cultural and religious differences, the disparate Ayleid City-States were never truly unified, and inner wars happened constantly. Over time, their continued worship of Daedra led to a slow decline of their Empire, as they fell deeper and deeper into abhorrent and decadent practices and customs.

Start a Discussion Discussions about The Ayelidoon Empire