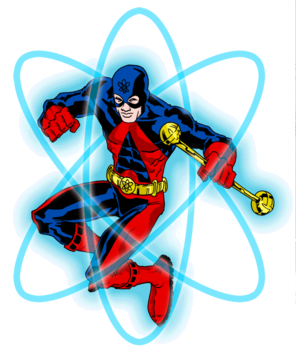 Powers and Abilities: Peak Human Physical Characteristics, Genius Intelligence, Martial Arts (Trained in judo), Weapon Mastery (With his sword), Size Manipulation (Uses a suit incorporating technology of his own design that allows him to shrink his body to any size, even subatomic levels; He is capable of retaining his full mass and strength while doing so or not; He is able to shrink others with him but they can only remain stable for an hour before their bodies explode), Resistance to Electricity (He can ride phone lines and electrical/photonic signals to a target), Body Control (Possesses full control over his own body at the molecular level), Flight (Is able to glide on air current and stiff breezes), Multiversal Travel (By shrinking below the quantum level, he is able to travel to other universes), Transmutation (Can personally rearrange molecules and atoms to affect transmutation)

Speed: Peak Human, up to Speed of Light when shrunken

Durability: Street level, higher when he shrinks but keeps his mass (due to density)

Range: Anywhere a phone line or electrical signal can reach

Standard Equipment: His suit which allows him to shrink, Katarthan's Sword

Weaknesses: Compassionate, usually will not use his powers to their full extent due to his sense of mercy

Player (Call of Duty: Black Ops III) (Call of Duty (Verse)) Player's Profile (Speed was equalized, The Player didn't have 9-B equipment, Battle takes place in Death Valley, Arizona, and they were 12 meters apart from eachother)