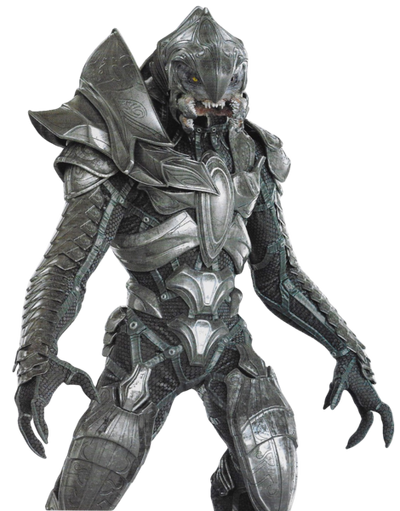 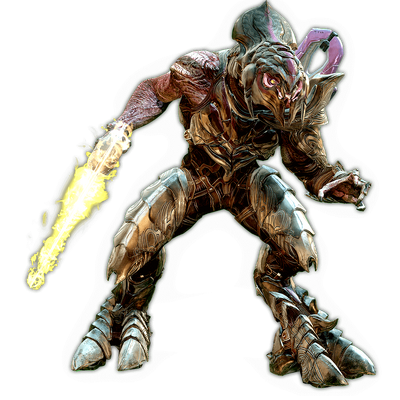 Thel 'Vadam, also referred to as Arbiter, is the deuteragonist of the Halo Franchise. He started as an antagonist in Halo 2 only to become a Minor protagonist in both Halo 3 and Halo 5's Campaign, helping John-117 to defend Earth and fight the Covenant and the Flood. After the Human-Covenant War, he returned to lead his homeworld through the "Blooding Years" and aided Fireteam Osiris in finding John-117.

He is a descendant of the House of Vadam, a powerful Sangheili Warrior family that Governs the Vadam State on the planet Sanghelios.

Age: 73 (human years) as of the Battle of Sunaion

Speed: Superhuman travel speed (Comparable to SPARTANs like Master Chief. Should be more than capable of running at speeds of 70+ km/hr) with Supersonic combat speeds and reactions (Can contend with SPARTANs in close combat)

Lifting Strength: Likely Class 10 (Should be comparable to Master Chief)

Striking Strength: Small Building Class+(Comparable to Master Chief. Fought evenly against SPARTAN II Jai-006 during his days as a Zealot)

Stamina: Superhuman (Comparable to Spartans and superior to any normal, unaugmented humans)

Intelligence: High. The most skilled combatant and the greatest leader the House of Vadam has ever seen. One of the most brilliant strategists & tacticians and overall outstanding commanders that the Covenant Empire ever had and arguably one of the greatest among his own species, with only the likes of Rtas 'Vadum and Usze 'Taham coming close. Is highly pragmatic for a Sangheili warrior and will not hesitate to do things that conflict with the Sangheili code of honour if it is absolutely necessary for the situation at hand.

Weaknesses: His energy shields will deplete if they take a severe enough beating. This means he'd be highly vulnerable to enemy fire unless he quickly found cover and allowed his energy shields to recharge to their fullest. Shields can't regenerate in the middle of rapid fire attacks. Shields are susceptible to plasma and electricity based weapons. Melee attacks tend to phase through the his shields.

Start a Discussion Discussions about The Arbiter (Thel 'Vadam)