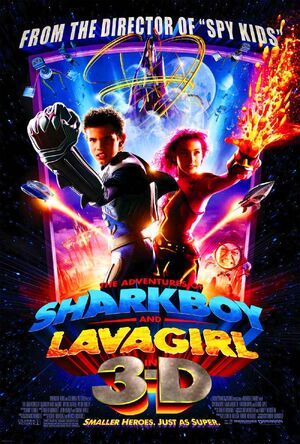 The Adventures of Sharkboy and Lavagirl is a 2005 film written and directed by Robert Rodriguez. The movie centers around Max, a 10 year-old boy who is fascinated by his dreams, going so far as to keep a journal where he records them. His most significant dreams center around the duo of Sharkboy; a half-human, half-shark mutant, and Lavagirl; a girl made out of molten magma. Max also is the frequent victim of bullying from another boy from his school named Linus. One day, Sharkboy and Lavagirl show up at Max's school during a tornado, informing him that he is the only one capable of saving their home Planet Drool from the evil Mr. Electric.

This verse is considerably powerful, with most characters falling into Small City level+ due to Mr. Electric being able to create storms. Despite being a normal human physically, Max possesses Multi-Solar System and possibly even Universe level+ hax thanks to his ability to harness the power of his dreams. After mastering her powers, Lavagirl was able to clear a storm covering an entire planet, which comes out to a Small Country level+ feat. In terms of speed, the verse tops out at Massively FTL thanks to Mr. Electric being able to fly across the solar system in a matter of minutes.

Start a Discussion Discussions about The Adventures of Sharkboy and Lavagirl