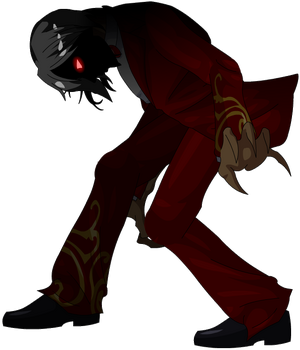 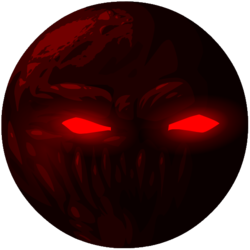 The'Galin is the god of uncreation, whose purpose is to uncreate every corrupt people and species. The'Galin was born on the continent of Inilar many millenia ago, and was leading an orphanage. Because his wife Lauren is a manifestation of Lorithia, Lorithia resurrected The'Galin when he died and raised him to the status of a god.

Powers and Abilities: Superhuman Physical Characteristics, Possession, Magic, Energy Manipulation, Death Manipulation, Shapeshifting, Non-Physical Interaction, Immortality (Types 1, 2, 3, 4, 6, and 9), Duplication, Ice Manipulation, Mind Manipulation (Omega's attacks can tear through both body and mind), Regeneration (High. Managed to restore himself after being exploded into particles of light by Beleqwaya), Existence Erasure that can bypass Acausality (Type 3) (The Uncreator's purpose is to locate sources of corruption, entropy, and decay and make it so that it had never existed in space and time), Memory Manipulation (Total uncreation of an object also erases the object from memories), Creation (Is able to uncreate the nonexistence of something), Time Manipulation (All Uncreation involves chronomancy), Self-Sustenance (Type 1, 2, and 3), Matter Manipulation (Can transform matter into uncreation energy and "bizzare matter"), Poison Manipulation ("bizzare matter" that sometimes remains after the uncreation of an object is poisonous to both body and mind), Spatial Manipulation (Incomplete Uncreation results in "bizzare flecks" which can break down the boundaries between realities), Soul Manipulation, Empathic Manipulation & Statistics Reduction via The Cold (The Cold is a telepathic technique that amplifies one's feelings of regret), possibly Life Manipulation (The Cold has also been said to be an ability that could take the lives of victims while they are still alive). Resistance to Death Manipulation (Immune to the The Chosen's use of Death's Power Word), Freezing, Paralysis Inducement, Void Manipulation, and Reality Warping (Possesses an immunity to the void which involves the rewriting of reality from the primal Void among a vast degree of possibilities). Can likely nullify Magic involving Dimensional Travel, including portals to other dimensions (Uncreation Energy alters the “fabric of magic”, causing dimensional travel to be far more difficult) | All previous, Spaceflight | All previous except Immortality (Type 9).  Avatar Creation, Non-Corporeal, Curse Manipulation, Teleportation, Portal Creation, Pocket Reality Manipulation, Resurrection.

Attack Potency: Planet level (Repeatedly stated to be capable of destroying the entirety of Lore, manages to instantly one-shot and kill Hero of Lore with his powers) | At least Planet level (Cut a planet in half with a single beam of energy) | At least Universe level (Said to supposedly be equal in power to Lorithia herself who is superior to the Elemental Lords feasted on the elemental forces of thousands of other worlds)

Lifting Strength: At least Class T (Threw the city of Tjeli into the bottom of the ocean)

Stamina: Virtually limitless. Never expresses the need or desire to sleep, does not fatigue even after long periods of combat with many warriors.

Range: Extended melee range with magic | At least Planetary, likely Galactic (The formation of uncreation particles causes them to blast across the galaxy) | Unknown

Retrieved from "https://vsbattles.fandom.com/wiki/The%27Galin?oldid=5386463"
Community content is available under CC-BY-SA unless otherwise noted.