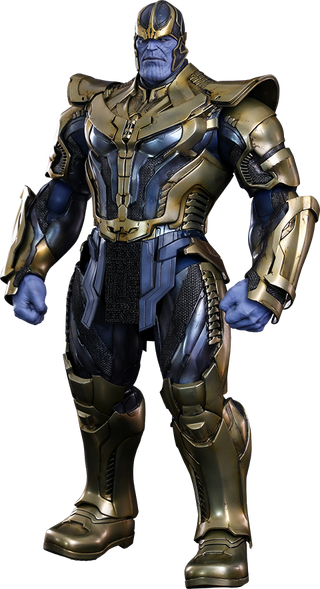 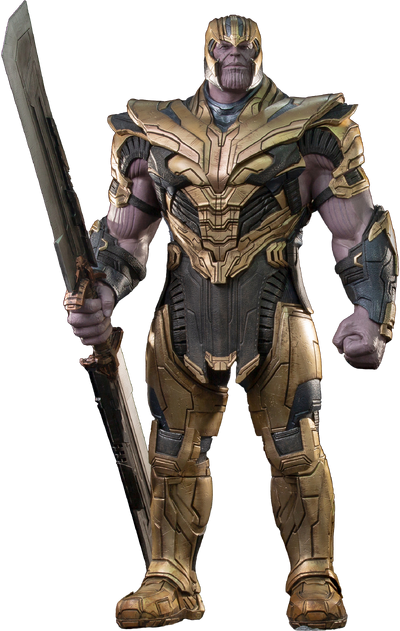 Thanos, referred to as the Dark Lord by his most loyal underlings and the Mad Titan by the galactic community, is a powerful Titan warlord who rules over a distant region of space and commands two massive armies, known as the Chitauri and the Outriders, and a small group of followers known as the Black Order. His main objective was to bring stability from the universe, as he believed its massive population would inevitably use up the universe's resources and condemn it. However, his methodology to succeed was warped; through the use of the ancient Infinity Stones, he intended to harness their power to exterminate half of all life in the universe, thus returning it to what he perceived to be a state of cosmic balance.

Tier: At least 7-B, likely higher. Higher with the Double-Bladed Sword | Varies depending on size, up to 5-A against celestial bodies with the Power Stone. Unknown with complete Infinity Gauntlet

Attack Potency: At least City level, likely higher (Effortlessly defeated both Hulk and Awakened Thor. Could do significant damage to Bleeding Edge Iron Man with ease. Far stronger than his children. During the events of Endgame, a 5 years younger version of him overpowered Thor, Mark 85 Iron Man and Captain America in a 3v1 combat, helding his own against the latter after he obtained Mjolnir. Is powerful enough to hold a returning Stormbreaker and almost shove it into Thor's chest, despite Thor using both of his hands to prevent it). Higher with the Double-Bladed Sword (Can deflect Stormbreaker and cut through Captain America's vibranium shield) | Varies depending on size, up to Large Planet level against celestial bodies with the Power Stone. Unknown with Complete Infinity Gauntlet (Threatened to tear the universe down to its last atom). Durability Negation with the Snap

Speed: Massively Hypersonic (Casually reacted to attacks from the likes of Thor, The Hulk, Iron Man, Spider-Man, etc. Shielded himself from automatic fire from the Winter Soldier. Slightly reacted to Thor's lightning though he still got hit, it should be noted that he was distracted. Can deflect repulsor arrays from Mark 85 after they were fired. Caught Stormbreaker returning to Thor. Dodged Thor throwing his Mjolnir at him. Caught Captain Marvel flying at him. Threw his broken sword at Luis' Van before Captain Marvel could enter the Quantum Tunnel), Massively Hypersonic+ attack speed with the Infinity Gauntlet (Threw meteors at these speeds)

Durability: At least City level, likely higher (Shrugged off everything that Thor and Bleeding Edge Iron Man could throw at him. Unharmed by Mark 85 Iron Man's attacks. Took hits from Captain America with Mjolnir. Can hold the Power Stone and use it). higher with armor and Double-Bladed Sword | At least City level with energy shields

Stamina: Very high (Can fight with Thor, Iron Man and Captain America at the same time for hours)

Intelligence: Genius (Thanos is a cunning and ruthless individual with an intellect sharpened by centuries of experience. A brilliant strategist, commanding vast armies that have devastated countless worlds and destroyed empires across the galaxy, which earned him renown as one of the most fearsome warlords in the universe. An incredibly skilled combatant, who easily outmaneuvered heroes such as Thor, The Hulk, Iron Man, Doctor Strange, Captain America, etc. during their confrontations, and who could quickly and intuitively learn and master how to wield the Infinity Stones. Found a way to time travel from 2014 to 2023 after obtaining Pym Particles. A master manipulator and an incredibly charismatic man if there was ever one)

Weaknesses: None Notable | He must be able to move his hand to activate the Infinity Stones. Continuous usage of the Stones had a toll on his body, as his left arm has been permanently damaged

Tails (Sonic the Hedgehog) Tails' Profile (Thanos with the Power, Space, Reality, and Soul stones as well as Super Tails is used. Tails had a week of preparation time and speed was equalized)

Waluigi (Mario Bros) Waluigi's Profile (Both were at their strongest, the fight took place in Peach's castle and speed was equalized)

Kars (JORGE JOESTAR) (JoJo's Bizarre Adventure) Kars' Profile (Kars had all of his stands sans Made In Heaven Ultimate Requiem, Thanos had the Complete Infinity Gauntlet and speed was equalized)

Shadow Queen (Mario Bros) Shadow Queen's Profile (Both were at their strongest, both were bloodlusted and speed was equalized)

Rick Sanchez (Rick & Morty) Rick’s Profile (Phoenix Protocol Rick with optional gadgets up to 5-A was used. Complete Infinity Gauntlet Thanos was used. Speed was equalized. Both had prior knowledge and 10 minutes of preparation)

Courage (Courage the Cowardly Dog) Courage's Profile (Courage's High 5-A form was used, speed was equalized, Courage was fully equipped and had 5 days of prep, and Thanos had the Infinity Gauntlet)

Gelatin (Battle for Dream Island) Gelatin's Profile (Speed was equalized, both were 7-B, Thanos had his Double-Bladed Helicopter Sword, and Gelatin had 20 freeze juice syringes, 10 forks, and his acid spitballs)

X (Battle for Dream Island) X's Profile (Base Thanos was used, and speed was equalized)

Four (Battle for Dream Island) Four's Profile (Speed was equalized, Thanos had the Infinity Gauntlet, and Four had the Anti-Flying Button)