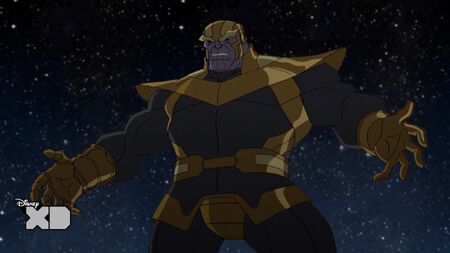 Thanos is an evil intergalactic Titan overlord and an enemy of the Avengers and the Guardians of the Galaxy.

Superhuman Physical Characteristics, Immortality (Type 1, 3 and 4, as a Titan, Thanos does not age beyond his prime and can heal all his injuries as long as his body remains intact and even revive himself if he dies), Regeneration (Up to High over time, can pull his particles back together if his body is completely destroyed), Energy Manipulation and Projection, Magnetism Manipulation (Can magnetically pull things towards him), Heat Vision, Technological Manipulation (Was able to manipulate Titanian fighting technology and mold them into his battle armor), Telekinesis, Dimensional Travel (Returned to his universe after being sucked by a black hole), Master Martial Arts, Weapon Mastery, Genius Intelligence

All the previous powers, Energy Manipulation and Projection, Forcefield Creation, Statistics Amplification (Can increase his physical strength and the power of the other stones) [With the Power Stone], Spatial Manipulation, Teleportation, Black Hole Creation (Can create and manipulate black holes) [With the Space Stone], Time Manipulation (Can control time to the point of aporting beings or things from other timelines), Time Travel (Can teleport beings from the past to the future to his own time), Age Manipulation (Can manipulate a being's aging process as well as his own) [With the Time Stone], Reality Warping, Illusion Creation, Invisibility (Was invisible in the illusion he created to trick the Avengers) [With the Reality Stone], Telepathy, Mind Manipulation, Empathic Manipulation and Mind Control (Fueled the Avengers with anger and made them fight each other), Creation (Created a citadel near Earth's orbit with the Infinity Gauntlet), Weather Manipulation (Used the Gauntlet to modify Earth's climate, causing earthquakes, ice ages, and other anomalies around the globe), Deconstruction and Matter Manipulation (Can destroy physical structures and form new ones from it), likely Soul Manipulation [With the Soul Stone]

All his basics powers, Nigh-Invulnerability, Aura (Generates a natural aura of energy after he absorbed the Quantum Force), Enhanced Senses (Created a scanning ray from his eyes from which he can scan and see every little molecule or microscopic being), Technological Manipulation and Hacking (Was able to psionically interface with all of Earth's satellite systems, in order to broadcast his video message), Absorption and Data Manipulation (Absorbed all of the data inside the Watcher's computer systems in an instant), Size Manipulation (Grew much larger after he absorbed the Quantum Force), Large Size (Type 2), Flight

Attack Potency: At least Country level (Stronger than Hulk who can lift all of Manhattan via sheer force and can destroy cities like New York with ease, among other feats. Overpowered the Avengers) | At least Country level, likely Universe level (Punched Thor so hard he projected him to the moon, partially breaking its surface in the process. Stated that he was able to wipe out millions of suns and worlds. Was about to remake the entire Universe at his image) | At least Planet level (While being augmented by the Quantum Force, he became strong enough to destroy planets with brute force only)

Speed: FTL (Can easily react to powerful strikes from Thor who can fly faster than Mach speeds on Earth and faster-than-light while in space) | FTL (Same as before) | Massively FTL+ (Can fly from one galaxy to another)

Lifting Strength: Class T (Stronger than Hulk who can lift all of Manhattan) | Unknown | Unknown

Durability: At least Country level (Can endure powerful punches from the likes of Hulk and survived strikes from Thor), Immortality and Regeneration make him hard to kill | Unknown via shields | At least Planet level, Nigh-Invulnerability makes him very hard to harm and kill.

Stamina: Extremely High (Can live without sustaining himself for centuries without difficulties)

Intelligence: Genius. Thanos is a master tactician who conquered multiple planets and lead numerous battles and being successful. He is a master of manipulation, being able to cause several ways across the galaxies while sitting in his chair. He even caused the Red Skull to create the Cabal and his master plan in the first place. Thanos is also an expert at manipulating many beings into fearing him, as to break their will to fight.

Weaknesses: Has an extremely developed ego that can be used to trick him. While his body will regenerate if he's completely destroyed and killed, it will take centuries for him to pull his particles together and come back to life. Each Stone has a loophole that can be used to counter its effects.