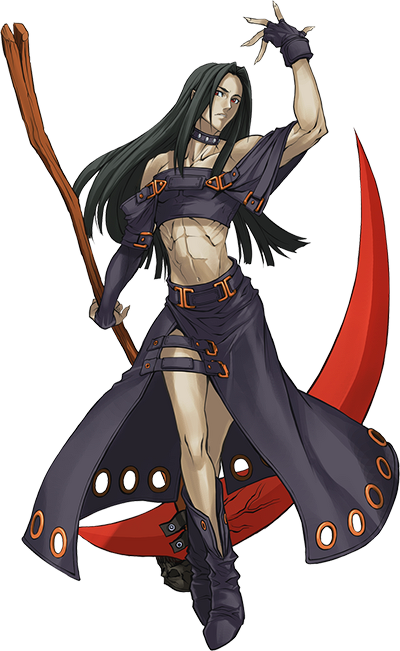 Testament (テスタメント, Tesutamento) is a human-type Gear in the Guilty Gear series of fighting game. He is able to wield odd magic and fights with both a scythe and impressive moveset consisting of summons, as well as his youkai familiar, EXE Beast.

Powers and Abilities: Superhuman Physical Characteristics, Immortality (Types 1, 3 and 4), Skilled in use of a scythe, Magic as Information Manipulation, Summoning (Can summon various familiars), Sealing (Can seal someone in another dimension), Regeneration (Low-High; Regenerated from puddle of blood), Dimensional Teleportation, Shapeshifting (Can change part of his body), Blood Manipulation (Can attack using his blood), BFR (Sent Justice to reality from the dimensional prison she was in), Poison Manipulation (Can poison others with his strikes), Invisibility (Was invisible during original Guilty Gear), Resurrection (Said to be able to resurrect from death and was able to resurrect twice), Aura, Non-Physical Interaction (Able to hit souls), Accelerated Development (Can absorb information quickly), Resistance to Disease Manipulation (Gear cells are able to cure diseases), Sleep Manipulation (Wasn't put into coma during Justice's inactivity), Power Nullification (Able to harm those who are beyond twelve steps without getting nulled), Transmutation and Information Manipulation (Resists getting his information rewritten), Mind Manipulation, Soul Manipulation and Matter Manipulation (Resists Backyard which assaults one's body, mind and soul)

Attack Potency: Multi-Continent level (Fought against Kliff during Crusade and exhausted him to death in GG1)

Speed: Massively FTL+ (Can keep up with a casual I-No), possibly Immeasurable (Comparable to Kliff)

Range: Extended melee range normally, thousands of kilometers with attacks, cross-dimensional with teleportation (Was able to appear before Zato in the interdimensional prison he was kept in)

Intelligence: Skilled fighter, masterminded the plot to free Justice in the first game, has a great deal of knowledge of the occult.