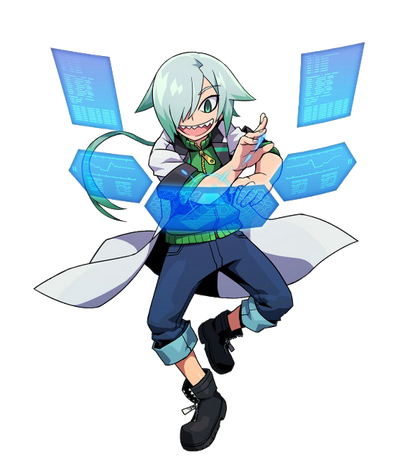 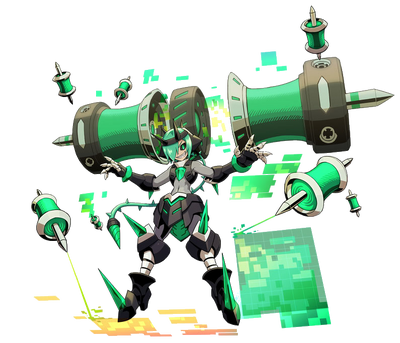 Teseo is one of the antagonists of Azure Striker Gunvolt 2. Originally, he was a contributor from a website that uploaded foreign movies, until it got shut down due to the increasing tention surrounding his kind. With nothing better to do, he scanned the internet until he stumbled upon Eden, and joined them as he took an interest in their technology. Ever since he joined Eden, their technology made huge improvement, which eventually earned him a high-ranking position as one of The Seven.

Powers and Abilities: Superhuman Physical Characteristics, Information Manipulation, Data Manipulation, Matter Manipulation (Can turn matter into data and vice-versa), Levitation, Teleportation (Of both others and himself), Energy Projection, Summoning (Can summon Bits that can fire laser beams, and "spawn" Wheeler Drones as well as Curse Scripts), Subjective Reality (Summoned a copy of Ekoro, who is a fictional character in his verse, during his fight with Merak), Hacking, Spatial Manipulation, Reality Warping (Can mess with the fabric of space, in order to link the walls, ceilings and floors), Explosion Manipulation, Homing Attack

Attack Potency: Large Town level (Compareable to other members of The Seven, fought Merak) | Small City level (Digitized an entire building, did battle with Gunvolt and Copen on seperate occasions) able to ignore durability by turning somebody into data and possibly via Curse Scripts

Striking Strength: Street Class (Doesn't physically fight, preferring to barrage opponents with projectiles, but he should be compareable to normal humans in his verse)

Stamina: Above Average Human (Can fight on even terms with gunvolt and Copen without suffering from fatigue)

Standard Equipment: His Grimoire, which significantly amplifies his Septimal powers, various drones (called Spinning Wheel Bits), explosives, holographic duplicates (which he calls Curse Scripts) which can drain his foes' health upon contact, and an unknown number of fodder enemies he can summon at any time.

Intelligence: Genius (In spite of his age, personality and arrogance, he's an incredibly skilled hacker who, after his arrival, has significantly improved Eden's already impressive technology to the point of becoming one of it's most high-ranking individuals due to his technological knowledge and incredibly versatile Septima, which he can use in a number of creative ways. Discovered many things about Gunvolt, like him living with Quinn or that he killed Asimov. Created, and succeeded, in a plan to make the public hate Gunvolt by leaking videos of Sumeragi's human experiments to make the public love him then livestreaming his fight with Gunvolt)

Weaknesses: As stated above, he's arrogant to a fault, and takes great pride in his hacking skills; even to the point where he scoffs at the thought of someone being better than him, and even declared himself a God at one point. In fact, the only times where his net troll persona breaks down, is when someone beats him at something; like when Merak sent him a virus, which left him at a loss of words, or when Copen beat him; which had him fall into utter despair, screaming in disbelief over his loss. Either can't turn somebody into data when their already in an area he turned into data or chooses not to from CIS.