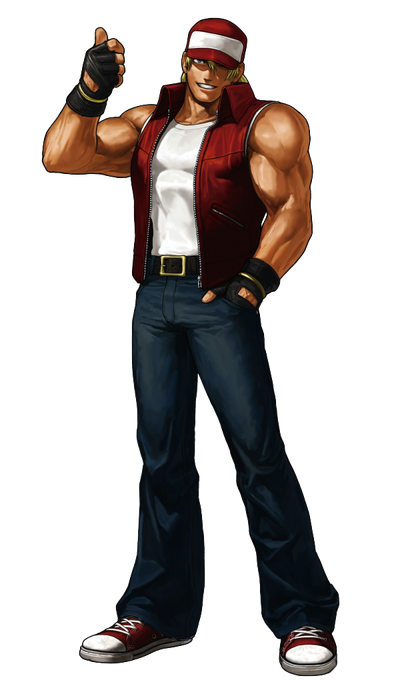 Terry Bogard (テリー・ボガード, Terī Bogādo) is the main protagonist of the Fatal Fury series. He has appeared in every Fatal Fury and The King of Fighters game, and is one of the characters of choice to symbolize the company in crossover games, merchandise, and publicity. He's the adopted son of Jeff Bogard, who was killed by Geese Howard. In order to avenge him, he trained under Tung Fu Rue and learned multiple fighting styles before confronting his adopted father's murderer. His victory over Geese and his half-brother, Wolfgang Krauser, made him a famous hero across the world and earned him the title, The Legendary Hungry Wolf.

Attack Potency: At least Small City level+ (Via power-scaling from Athena Asamiya and Sie Kensou. As one of Kyo Kusanagi's rivals, he occasionally fights with him)

Speed: Massively Hypersonic (Can keep up with the likes of Kyo and Takuma Sakazaki)

Lifting Strength: Class 5 (Can throw people as large and heavy as Chang, who also carries a large iron ball)

Durability: At least Small City level+ (Took hits from characters on this level like Kyo)

Intelligence: Above Average (While lacking on formal education and academic knowledge, Terry possesses a highly complex knowledge that combines multiple fighting styles and is a genius in terms of combat)

Weaknesses: Is arrogant and cocky

All Might (My Hero Academia) All Might's Profile (Low 7-B versions were used. Speed was equalized)