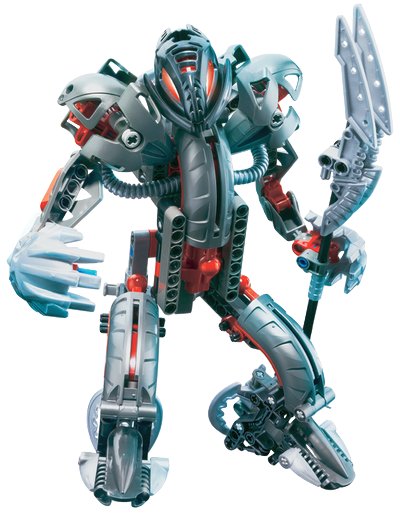 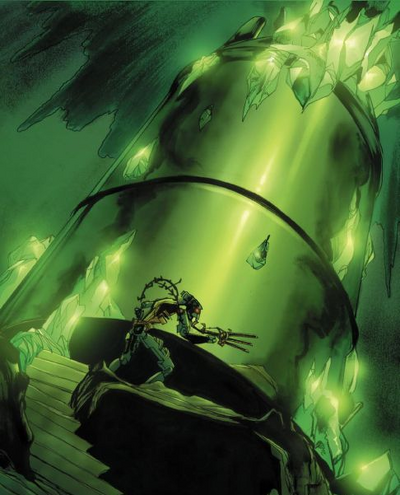 Teridax, better known as simply the Makuta, is the most infamous of all of the Matoran Universe’s evils. Created by Mata Nui, he was one of the members of the Brotherhood of Makuta, an organization dedicated to protecting the Matoran Universe and filling it with life in the form of the Rahi.

Like all Makuta, Teridax was always an immensely proud and ambitious person. After defeating the Barraki and foiling their attempts to overthrow Mata Nui, Teridax began contemplating doing the same himself. After Mutran, another member of the Brotherhood, learned of the true nature of the universe from Tren Krom and that Mata Nui could be usurped, Teridax turned against his creator and took control of the Brotherhood of Makuta, deposing the previous leader with almost unanimous support.

After his deception and betrayal became knowledge and his own Toa turned against him, defeating the Brotherhood of Makuta in nearly all their battles, Teridax struck out against Mata Nui with a virus that put him to sleep and nearly killed him. With his starting pieces in play, he began his slow plan to conquer the Matoran Universe and reign over it in Mata Nui’s place.

Powers and Abilities: Superhuman Physical Characteristics, Flight (He can fly by growing wings), Makuta Physiology, Darkness Manipulation (Possesses mastery over elemental Shadow), Energy Manipulation, Matter Manipulation (Transformed liquid Protodermis into solid spheres and pillars, capable of creating Rahi from Protodermis, and breaking down objects on a molecular level through various means), Mind Manipulation (He can control Rahi, Matoran, and Toa with or without infected Kanohi, insert thoughts into the minds of others, paralyze them with indecision and panic, and subtly manipulate them without them realizing it, his Antidermis can be used to make others completely obedient, and he completely broke Karzahni's mind, leaving him in a vegetative state), Pain Manipulation (Teridax's mental powers can induce pain in others), Virus Manipulation (Can engineer and control energy-based viruses that can infect mechanical or biomechanical beings, or create new Rahi), Absorption (Can absorb others and take on their traits, even in his Antidermis form, and can absorb energy and drain it from others), Corruption (Types 2 and 3; Makuta can infect Kanohi with Kraata, and seventh-stage Kraata can do this from a distance), Illusion Creation (Can create complex, long-term illusions that near-perfectly recreate people and their surroundings, and can even create illusory figures that have from the darkness in his opponent's hearts, replicating their powers and skill), Inorganic Physiology (Type 1), Non-Corporeal (In his true form, Teridax is a mass of Antidermis, which is pure energy), Possession (Can possess unoccupied bodies), Self-Sustenance (Types 1, 2, and 3), Shapeshifting and Sizeshifting, Telepathy (Can telepathically communicate with people across the Matoran Universe and read the minds of others, anticipating all of their movements and attacks from their thoughts), Teleportation, Transmutation (Can transmute Protodermis and light into Shadow), Longevity, Immortality (Type 6), Resistance to Telepathy/Mind Manipulation (Takanuva couldn’t read his thoughts when they were fused, and he laughed off Takadox’s hypnosis)

Attack Potency: Island level (Can casually cause volcanic eruptions with his mental powers, overpower the Toa Mata without even revealing his true body, and easily fight off Icarax and his small army of Manas for hours before utterly humiliating him once he got serious. Vakama was convinced his fight with the Shadowed One and Voporak would destroy Metru Nui), can ignore conventional durability with many of his powers. | Dwarf Star level (Can destroy Bara Magna with a single burst of gravity, and can pull its moons in to recreate the even larger Spherus Magna), possibly Star level (According to Greg Farshtey, the Great Spirit Robot can destroy suns).

Speed: Massively Hypersonic+ (Can keep up with Toa, who can fight with Avohkah, lightning-based Rahi that possess the properties of lightning and were mistaken for lightning bolts, as well as Bohrok-kal, Rahkshi, and Makuta who can manipulate electricity), possibly Relativistic (The Toa Inika could react to and dodge Umbra in his light form) | Sub-Relativistic+ (The Great Spirit Robot moves at such speeds due to its immense size). Nigh-Omnipresent in the Matoran Universe (While it is contained within his body, his awareness of what's occurring within is not perfect). Unknown, possibly Massively FTL+ travel speed with the Red Star (Capable of traveling across the universe in an unspecified timeframe).

Lifting Strength: At least Class M (Should be comparable or greater in strength to Roodaka, who once ripped Krahka, in the form of a Troller, a giant Rahi who can fit a city block in its mouth, from the ground with a single hand), possibly higher (Brutaka claims to have uprooted mountains) | At least Class Z (The Great Spirit Robot is only slightly smaller than Earth, and Teridax can move moons and planets with his control over gravity).

Striking Strength: Island Class (His physical strength far exceeds that of a Toa, he matched Keetongu in sheer strength, and broke out of the Shadowed One's Protodermis binds by flexing) | Dwarf Star Class, possibly Star Class (Traded blows with the Prototype Robot).

Durability: Island level (Casually fought off Icarax for hours without taking any significant harm, took a Light attack from Takanuva head-on and got back up mostly fine despite being weak to Light, and took a surprise attack from Brutaka, who can nearly kill all six Toa Nuva with a single slash, without much issue). His immortality makes him hard to kill, as he can abandon his bodies whenever necessary. | Dwarf Star level, possibly Star level (Took blows and energy blasts from the Prototype Robot, and stated that he could survive the destruction of Bara Magna, dying only when a chunk of Spherus Magna crashed into his head at high speeds, catching him off guard).

Stamina: Extremely high. Teridax's stamina should be comparable to that of Toa, and the Toa Mangai fought against the Kanohi Dragon for an entire month. He also fought against Icarax for several hours straight.

Range: Extended melee range, Kilometers (His minimum range should be comparable to a Toa's, such as Pohatu, who destroyed the massive Odina Fortress with a single timed Stone Blast, recreated entire metru in his illusions) to Hundreds of Kilometers (Can appear in shadows across all of Mata Nui, and his Power Scream can be heard from anywhere on Mata Nui) to Planetary (Teridax can teleport and affect things across the Matoran Universe) with his abilities | Interplanetary (Can pull multiple planets at once with gravitational forces)

Intelligence: Genius. Teridax is a brilliant strategist who has spent thousands upon thousands of years carefully planning and executing a specific plan to usurp control of the Matoran Universe, accounting for even his setbacks and failures, and finding a way to turn even his legitimate losses to his favor. While his plans stretch over millennia, his intelligence allows him to quickly improvise when things go wrong and find a way for everything to work out in his favor, even at a disadvantage. He is nearly just as skilled in combat, thinking rapidly and turning his opponent's strengths against them. He uses his abilities in concert, carefully overwhelming his opponents with whatever powers he finds best suited for the task. Through his telepathy, he can read the minds of his opponents as they attack, reading all of their future movements and moving to dodge them all effortlessly. As with all Makuta, Teridax has a deep understanding of the world and how it works, and is capable of molding Protodermis into the shapes of Rahi and dangerous viruses.

Weaknesses: Teridax is extremely arrogant and is vulnerable to light. He can only use one of the Kraata powers at a time. In his Antidermis form, he can only access his mental powers, is weaker than normal, and needs a body to contain his essence so he doesn’t dissipate. | Teridax remains extremely arrogant, and has lost many of his body-based powers, such as his regeneration and shapeshifting. The Great Spirit Robot must be constantly maintained by the Matoran within to remain functional.

Note: While the Red Star has been stated by Word of God to be incapable of surpassing the speed of light, Mata Nui traveled across the universe in a short timeframe with it.

Makuta: Teridax is one of the Makuta, a powerful race of hundred beings created at the beginning of the Matoran Universe by Mata Nui. Although once a biomechanical being, Teridax has evolved past a physical body like the rest of his kind, taking on a form of pure Antidermis, though he requires a body to fully utilize his power and prevent his essence from drifting apart.

Kraata Powers: As with most Makuta, Teridax possesses all forty-two of the powers used by the forty-two variants of Kraata and, thus, Rahkshi. Some of these powers are already provided otherwise due to his nature as a Makuta, such as shapeshifting and mind reading. He can only have one of these powers active at a time, but he can easily and rapidly switch between them.

Teridax can control and manipulate the environment within the Great Spirit Robot, and can teleport those within outside to suffocate in space. It has control over all things in the Matoran Universe; all the elements that compose the world, and all the environments themselves. The robot can fire energy beams and exert powerful bursts of gravity that are capable of destroying and reforming Spherus Magna.

His link to the Great Spirit Robot also greatly enhances the power of Teridax’s mental powers and illusions, to such a degree that he was able to trap Miserix in an illusion where he fully believed he was a painting, and trapped the entire Toa Hagah in one where they had defeated him. However, Teridax could no longer use his body-based powers, such as shapeshifting. The Great Spirit Robot’s power is also dependent on the constant maintenance and work of the Matoran within, and substantial damage to these systems will incapacitate it. 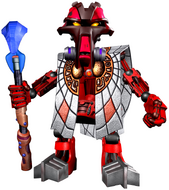 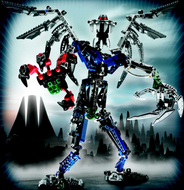 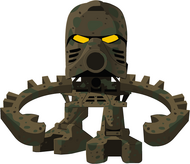 Teridax disguised as a Matoran

Teridax's appearance in the Mask of Light film

Teridax's appearance in the Legends of Metru Nui film 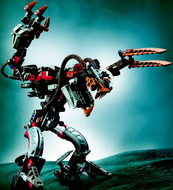 "Makuta Nui", one of the many forms Teridax can take

Teridax possessing the Maxilos, with the Spinax hound
Add a photo to this gallery