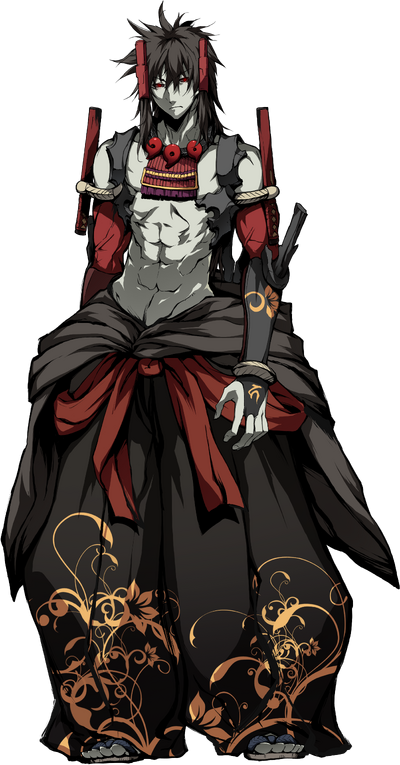 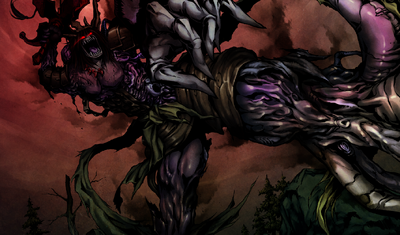 Tenma Akuro is a member of the Yatsukahagi, a group from the Old World of the Fifth Heaven.This Faction vowed to protect the remnants of Tasogare World no matter the cost.

During the Eastern Expedition, Akuro will make a rivalry with a swordsman named Soujirou, and they would later engage in their final battle which will end up with Mibu as the Victor.

Powers and Abilities: Superhuman Physical Characteristics, Immortality (Types 1, 3 and 10), Durability Negation, Soul Manipulation, Space-Time Manipulation, Acausality (Type 5), Causality Manipulation, Reality Warping (The Tenmas can alter their own hierarchy of existence as they choose, making it lower or higher as they manipulate the flow of their Taiji), Regeneration (High-Godly; can regenerate from conceptual destruction), Abstract Existence (Type 1), Conceptual Manipulation (Type 1), Probability Manipulation, Non-Corporeal, Matter Manipulation, Cosmic Awareness, Poison Manipulation (Capable of rotting and poisoning all matter around him, encasing himself in poison so that anything that touches him rot, shoot poison throughout his sword and creating a cloud that corrodes and poisons anything it touches), Law Manipulation (Like all gods the Tenma’s are capable of utilizing their Laws by enforcing them upon reality, which they can use for varying effects depending on the desire of the God. Due to the Law of Tenma Yato they to possess “Time Armor” which can completely negate change), Invulnerability, Summoning (Can Summon the Physical Manifestation of his Law), Up to Large Size (Type 11), Beyond-Dimensional Existence (Type 2)

Attack Potency: Varies (The Tenma's all have complete control over the flow of their Taiji and their existence allowing them to freely change their power on a whim), Large Country level+ (Comparable to Tenma Morei) to High Outerverse level (As a legionnaire, Akuro is boosted to the same level of existence as Tenma Yato, could hold his own against Soujirou after the later has reached godhood because of the Tumor Mandala though only for some time and at full power, Tenma Akuro is significantly stronger than when he was a member of Reinhard's Legion). High Outerverse level via Mugen Kyoken Jigoku.

Speed: Varies, Massively Hypersonic+ (Can keep up with the Eastern Expedition) to Irrelevant.

Durability: High Outerverse level (Even when not using their Taikyoku, the Tenma's physiology remains unchanged as only the power of their attacks is affected. This is due to them existing in a higher plane and not how physically strong they are, thus making attacks from a lower plane unable to harm them), Time Armor, Immortality and Regeneration makes them hard to kill.

Range: Varies, up to High Outerversal

Intelligence: Extremely skilled combatant with thousands of years of experience.

Weaknesses: Tenma Akuro is given protection by Yato Time Armor, but should he move farther away from Yato influence, he would get weaker.

Note: Tenma Akuro (and the rest of Yato's legion) have never been shown at full power as they were sacrificed to restore Yato's Taikyoku back to 100 when he was weakened to 70 so Akuro would logically be stronger than when he was a part of Reinhard's Legion.

Note: The OP can specify that he is outside Yato's influence removing his Time Armor.