For detailed information about the series, see: The Tenchi Muyo wiki.

Tenchi Muyo! began as a series of OVA's by Masaki Kajishima. There are three separate series, Muyo! Universe, and Tenchi in Tokyo, but only Tenchi Muyo! Ryo-Ohki is considered canon. The spin-off GXP series is also canon.

The series focuses on a young man named Tenchi Masaki, who accidentally releases the Space Pirate Ryoko from her slumber. Before he knows it, he's got a harem of females all vying for his affection (especially Ryoko and Ayeka) and Tenchi doesn't quite know what to do with regards to his situation.

Tenchi soon discovers that he is of Juraian royal blood (the dominant power in the galaxy) and that he can create Light Hawk Wings, the essence of the Choushin goddesses. More strange adventures follow, and it is revealed that he is the avatar of a supreme entity in OVA 3.

Tenchi Muyo! is is one of the most powerful anime verses. It has incredibly complex and advanced technology, equipment, and a cast of reality warpers and higher-dimensional or beyond dimensional entities.

The Tenchi Muyo world has an extremely high level of scientific and technological development. Pocket universes, and planet and star-sized spaceships are not anything extraordinary. There is a ship that can haul an entire galaxy, without even possessing any Light Hawk Wings, and there are artificial beings/cabbits with universal level energy. And this is still just in the three-dimensional universe. There is also a multiverse full of different parallel universes/alternative possibilities.

However, beyond all of this there is the super dimension, and the three Choushin deities who created everything. An absolute scientific database, wherein there is information beyond all understanding, can perform logical rationales for the existence of all higher-dimensional beings. However, this does not apply to the Choushin, who surpass all dimensional space-time. They register as not existing at all.

The Choushin are stated to be true deities, shown as enormously larger than all of existence combined, beyond physics, beyond logic, comprehension, scientific definition, and dimensional scale, the creators of an infinite number of higher-dimensional experiments and completely beyond all of existence.

The crucial information for their statistics lies in the original Japanese terms. There is a fairly clear separation between Kō jigen (高次元) and Chō jigen (超次元).

Kō jigen = higher dimensions = realms beyond understanding, beyond physics, but which can still be evaluated as existing and somehow justified logically (That is, you can call it 5-D or 10-D, etcetera).

Chō jigen (超次元) = super dimension = It is not Kō jigen. This has a fundamental difference with Kō jigen, it does not exist in any sense as Kō jigen, it can not be logically justified as Kō jigen, and it is plainly said to be beyond Kō jigen (that is literally "beyond higher dimensions").

"Kami Tenchi" has been stated outright as the highest known supreme being of the entire Tenchi Muyo continuity, having created, transcending, and being as incomprehensibly beyond the Choushin as they are to ordinary beings. 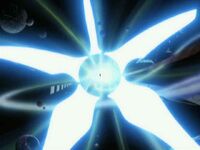 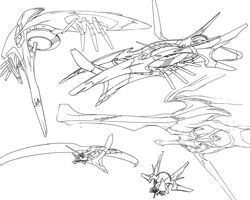 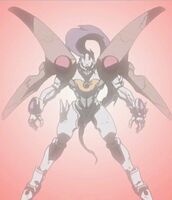