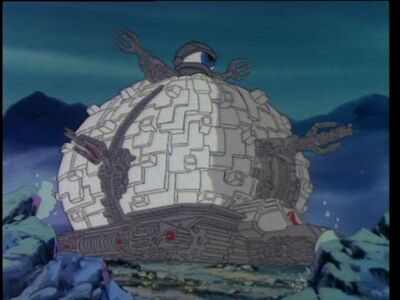 The Technodrome is the war machine of The Shredder, it is capable of surviving in some of the harshest environments on Earth and in space. The Technodrome is covered in foot-thick titanium armor, has a massive amount of weapons, and stands several stories tall.

Needed Prerequisite for Use: None

Attack Potency: Mountain level (Made a small mountain collapse, destroyed several other mountains by accident with its missiles), Large Planet level (Created a gigantic portal several times bigger than the planet Earth and it was sucking everything like a black hole)

Durability: Mountain level (Survived crashing against a mountain with no damage at all)

Weaknesses: Can easily be tampered from the inside

Note: These feats ocurred in the episodes Planet of the Turtles, The Big Break-In and The Big Blow Out

Retrieved from "https://vsbattles.fandom.com/wiki/Technodrome_(1987)?oldid=5964637"
Community content is available under CC-BY-SA unless otherwise noted.