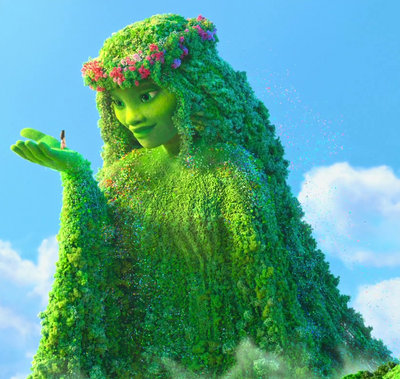 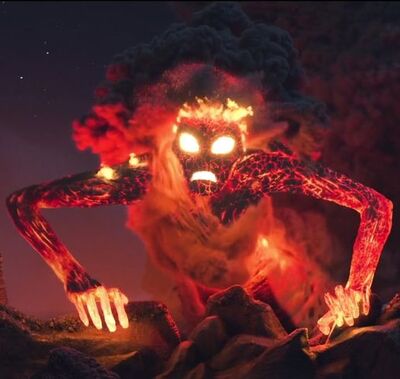 Te-Fiti, also known as Te-Kā, is the main antagonist of Moana. Originally a spirit of life, Te-Fiti appeared in the world when it was only ocean, and, using her life-giving heart, created all masses of land in the world and filling it with life, before returning to rest on an island formed from her own body. Millennia later, the demigod Maui would appear and claim her Heart to gift it to humanity, transforming the life goddess into the fire demon known as Te-Kā, who battled Maui and caused him to lose possession of both the Heart of Te-Fiti and his magical fishhook.

Classification: Goddess of Life | Demon of Earth and Fire

Speed: At least Superhuman by virtue of sheer size, at least Subsonic reactions (On par with Maui)

Lifting Strength: At least Class E, possibly Stellar (Her full form is that of an island, comparable to Maui)

Range: Several kilometers by virtue of size, Planetary with her powers

Intelligence: Although her personality is not delved into deeply in the film, Te-Fiti is known to be a wise and powerful goddess who created the landmasses and all life, being respected for her benevolence and power. However, as Te-Kā, she is berserk and bestial from the agony of having her heart torn from her chest, clawing at her foes and clambering around on all fours. Nevertheless, she remains a capable combatant, being more than capable of matching Maui even with his fish hook, swatting him out of the sky when he tried to evade her blows as an eagle.

Weaknesses: If her heart is removed, Te-Fiti will revert into Te-Kā | Due to her lava-based physiology, Te-Kā will harden into rock if exposed to large quantities of water (However, she has shown the ability to reignite her body in seconds if this happens)