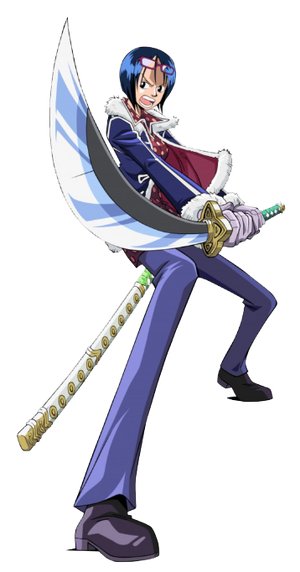 Tashigi was first introduced when the Straw Hat Pirates docked in Loguetown, where she was stationed. Smoker, her superior officer, seems to regard her as a protege; the two work very well together. While adept at sword fighting, she is unusually clumsy, which tends to get on Smoker's nerves. She is also very well-versed in katana, knowing their names and origins. Zoro often feels highly uncomfortable around her due to her striking resemblance to his late friend Kuina, who she fights like and even shares philosophies with.

Like Smoker, Tashigi has her own view of "Justice" which differs from the Marines' own definition, and will fight for what she sees as the right thing to do. Tashigi's stated goal is to remove all Meido, a class of famous swords, from the hands of those who would use them for their own selfish ends.

During the Time Skip, she achieved the rank of Captain and now runs G-5 along with Smoker. She is also revealed to be a user of Haki.

Powers and Abilities: Superhuman Physical Characteristics, Skilled Swordswoman (Is easily able to deflect cannonballs using her blade, which she achieves by redirecting the cannonball on the thinnest edge of her sword) | Same as before, Statistics Amplification (via Soru), Haki (Basic Busoshoku and Kenbunshoku Haki user)

Attack Potency: Likely Large Building level+ (Shouldn't be much weaker than East Blue arc Zoro) | Small City level+ (Briefly contended with Monet's snow-storms, and even managed to wound her in the process. Should be considerably stronger than most Marines of lower ranks)

Speed: Likely Hypersonic+ | At least Massively Hypersonic+ (Should be much faster than pre time-skip Coby with the use of Soru, and managed to intercept several attacks from Monet before being overwhelmed), higher with Soru

Durability: Likely Large Building level+ | Small City level+ (She took an assault from Monet, and could withstand most of her attacks despite being outmatched later on)

Stamina: High (Continued fighting despite being pierced in the shoulder multiple times)

Intelligence: Skilled combatant (though is shown to be clumsy)

Weaknesses: Tashigi is somewhat clumsy and can be easily provoked in battle.

Kiri Shigure (Cut Autumn Rain): Tashigi swings and cuts a target while holding her sword with two hands over her back.

Rokushiki: A special, superhuman martial arts style used primarily by members of Cipher Pol #9. It consists of six special techniques, Kami-e, Geppou, Rankyaku, Shigan, Soru, Tekkai. So far Tashigi has only displayed the use of Soru. 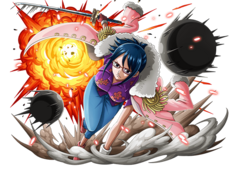 Retrieved from "https://vsbattles.fandom.com/wiki/Tashigi?oldid=5237539"
Community content is available under CC-BY-SA unless otherwise noted.