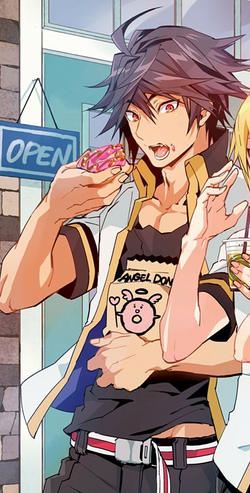 Taro Sasagae is a character in BlazBlue: Remix Heart. He was Jin Kisaragi’s roommate back when he was still a student at the Military Academy. He also worked as part of the student body council. Taro seems to be a friendly and sociable guy. He gets along with Akane and Jin very well, calling the latter “Jinny” instead of using his actual name. Taro can be serious at times, but he is easily distracted. He likes to mess with Jin sometimes, to the latter’s annoyance. He has a tendency to give people nicknames.

Superhuman Physical Characteristics, Expert Martial Artist, Stealth Mastery, Ars Magus User, Invisibility and Extrasensory Perception (Likely inherited Ikaruga Ninjas' techniques due to being trained by Kagura), Regeneration Negation (Up to High-Godly; is able to utilize Ars Magus, a weapon capable of killing the Black Beast, a creature that has the ability of Self Observation, which is what Terumi used to regenerate from Hakumen's Time Killer), Weapon Mastery, Forcefield Creation (Can create forcefields with various sizes), Electricity Manipulation (Can use lightning as offensive options), Creation and Thread Manipulation (Can create threads to restrict opponent's movements), Density Manipulation (Can decrease a person's weight)

Attack Potency: At least Building level (Shouldn't be far too below RH Mai and Shiori, who saw him as a threat) | At least Large Town level+, likely Small Country level+ (Managed to hold off Fuzzy, bone dragon and even CT Ragna for brief amount of time. Ragna needed to burst to get out of his strings. Managed to destroy one of amped Meifang's hell fangs)

Speed: Massively Hypersonic+ (Can shoot lightning as a weapon and likely comparable to Mai who can fight against Cypher, who can react to electricity) | FTL (Comparable to CT Ragna)

Stamina: High. Able to fight while having mortal injuries.

Retrieved from "https://vsbattles.fandom.com/wiki/Taro_Sasagae?oldid=5882661"
Community content is available under CC-BY-SA unless otherwise noted.