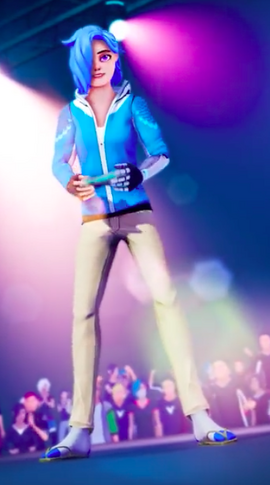 Tari is a Meta-Runner: a gamer who had one of their limbs amputated and replaced with a cybernetic attachment to improve video game performance. Unfortunately, the process of becoming a Meta-Runner is a very painful one (fatal in the case of Lucinia Porter: Sofia's sister), especially for Tari despite having lost her memory of her process. Despite having seen and put through the horrors brought onto Meta-Runners by TAS-Corp, she was forced to tag along with TAS-Corp to release her friends at the end of the first season.

Tier: 10-A in the real world; Varies in video game worlds

Powers and Abilities: Superhuman Reflexes, Technology Manipulation, Statistics Amplification, Immersion (Although unaware of how she's capable of doing so, she has been capable of tapping into the worlds of the video games she played), Information Analysis (Able to gather information about various paths and exploits and even the success rate of different actions), Precognition (Her information analysis allows her to predict the best result nearly a whole minute before attaining it), Weapon Mastery (Within game worlds, she is capable of making use of any weapon given to her within a video game), Accelerated Development (Was swift to catch up to Masa, a more-experienced Meta-Runner, in an FPS game), Resistance to Tracking (Her hoodie allows her to block signals from tracking devices such as TAS-Corps' streaming pods)

Attack Potency: Athlete level in the real world (Despite the world of Meta-Runner revolving around gaming, Tari was capable of pulling off some athletic feats physically), Varies in video game worlds

Speed: Athletic Human (Even when completely unused to video game physics, she was able to clear a pit with a running jump; her running ability is the only thing in both the real world and in video game worlds that seem to match), Subsonic reactions with her arm (By entering commands into her arm, she can immensely increase her reaction times, allowing her to make frame-perfect inputs much like TAS devices. A frame on a fast-performing video game lasts 1/60 of a second (0.01667 seconds))

Intelligence: Average (Although her mind goes completely blank in the real world when she's immersed into a video game world)

Weaknesses: Usually unwilling to fight; any tampering to her mechanical arm causes a great deal of pain to her regardless of where she's at. In video game worlds, Tari is subjected to the logic of the world she's in.

Note: This profile is for the Meta-Runner version of Tari. The original version was excluded as she appears in a largely meme-focused series of videos.

Retrieved from "https://vsbattles.fandom.com/wiki/Tari_(Meta-Runner)?oldid=6949175"
Community content is available under CC-BY-SA unless otherwise noted.