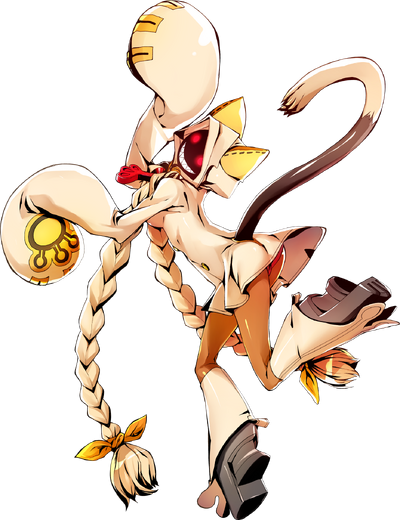 Taokaka is a heroine from BlazBlue. She is a respected warrior of the Kaka clan, who is attempting to apprehend Ragna the Bloodedge and use the bounty to secure a new home-land for the Kaka. Though she quickly forgets the task and ends up befriending Ragna due to him feeding her. Ever since then she refers to him as "Good Guy" and helps him in whatever way she can, even if her help can be...superfluous.

Superhuman Physical Characteristics, Weapon Mastery, Martial Arts, Enhanced Senses (Her senses can detect Izanami), Pseudo Duplication and Damage Reduction (via Super Tao), Hammerspace (Can carry a seemingly endless amount of junk that she tosses as projectile), Body Control (Can manipulate her body in superhuman ways), Summoning (Can summon little Kakas to help her in battle), Non-Physical Interaction (Can hit Arakune), Statistics Amplification, Shockwave Generation (Capable of blowing people away by bursting), Regeneration Negation (Up to High-Godly; is able to utilize Ars Magus, a weapon capable of killing the Black Beast, a creature that has the ability of Self Observation, which is what Terumi used to regenerate from Hakumen's Time Killer)

Attack Potency: Large Town level+ (Kept up with CT Arakune and Bang) | At least Large Town level+, possibly Large Planet level (Far stronger than before. Fought against depowered CF Ragna and Azrael for a while)

Speed: FTL (Can easily keep up with Tsubaki with the Izayoi) | Immeasurable (Was shown to keep up with characters that can move through time in the Boundary, and are stated to transcend time and space for accomplishing the feat)

Intelligence: Is the least intelligent character in BlazBlue. Like most cats, Taokaka’s daily routine consists of eating and sleeping, and she can, and often will, forget anything she does or is told to do within three steps or seconds. Of course, it goes without saying that she is not totally dumb. Taokaka often gives nicknames to those she meets so she can try to easily remember them later. She does actually know who they are, but prefers the nickname routine. Of course, much of her simple-minded traits can be compared to how a cat’s mindset actually works, especially when it comes to how fascinated by things she can be (such as a pair of breasts) or how her mind tends to seemingly drift away from more serious things

Weaknesses: Is ditzy and quite dumb. Always wants food and considers anyone who gives her food as a "good guy".