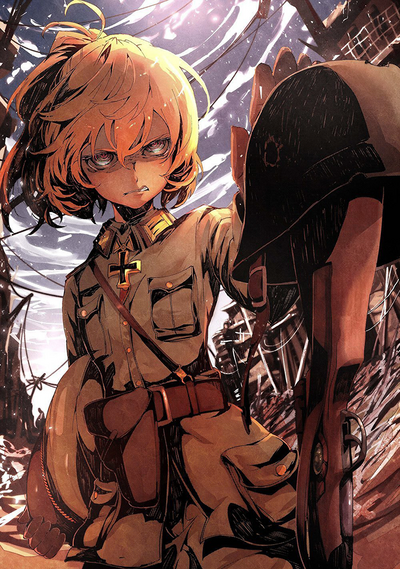 The main protagonist Tanya is a young, blonde, blue-eyed girl who is the reincarnation of a Japanese Salaryman. Due to her refusal to believe in God and encountering a figure, who she dubs X instead of God, she was sent into a fantasy realm of the current verse's setting. Her past refusal to believe in fantasy turned her into a mage with magical powers, enabling her to fly and fire explosive bullets. She is a Second Lieutenant in the Empire Army and quite ruthless and intolerant of failings in others - much the same as in her previous life.

Powers and Abilities: Superhuman Physical Characteristics, Flight, Superhuman Augmentation, Explosion Manipulation (Could make bullets explode with the power of a nuke), Telekinesis, Weapon Mastery (Skilled in marksmanship as well as the use of knives and bayonets; casually sliced a plane and stabbed others mid-flight), Distortion of Space (As a side effect of various spells, however doesn't deal damage or has otherwise practical use), Danmaku (Via spells), Homing Attacks, Illusion Creation, Forcefield Creation, Magic (Can create magical blades so that she can cut humans in half with bare hands), Extrasensory Perception (Can sense magic and might recognize its wavelength to conclude what it does. Useful for aim-dodging), Pain Manipulation (Can use a neural interference spell that simulates pain)

Attack Potency: Building level (Easily destroys other enemy barriers that can take large explosions, her earlier attacks are of this level) to Town level (Released what could be called an equivalent of a nuke), likely higher (The explosion of said attack easily dwarfed the nearby mountains) Said attack above ignores conventional durability (Disposes of oxygen in a very widespread area as a bonus effect), likely higher via suicide attack (The explosion of the operation orb is implied to exceed the power of the spells Tanya can cast)

Speed: At least Subsonic (Stated to casually fly with more than 250 knots)

Stamina: High (Has been fighting for days in a war)

Range: Tens of Kilometers (Could shoot an enemy command post from more than 20km away)

Intelligence: As smart as an adult salaryman. Perceptive and knowledgeable about war, easily able to outwit enemies with tactics and maneuvers. Uses her size wisely.

Weaknesses: Magic barriers have two variants: Passive and Active. The Passive shell covers the entire body but is much weaker, protecting only from shrapnel, bullets, and blast waves. The Active shell is much stronger, capable of stopping multiple artillery rounds, but it requires high concentration to utilize and is mostly focused towards one direction (this depends on the mage's skill and amount of mana). This makes maintaining an Active shell highly impractical, leading most mages to swap between the two to conserve magic.

Aang (Avatar: The Last Airbender) Aang's profile (Both were at 7-C, speed equalized)