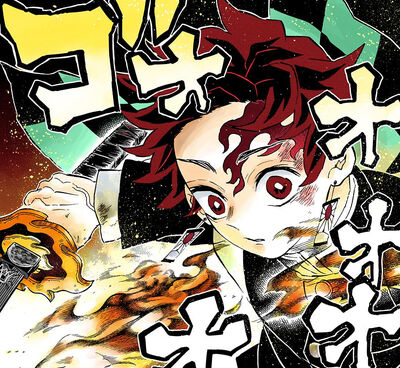 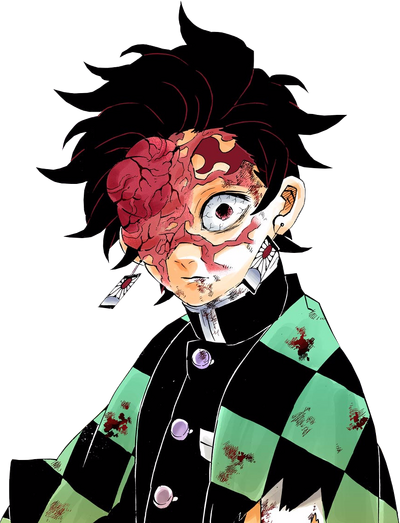 Ever since the death of his father, Tanjirou has taken it upon himself to support his family. Although their lives may be hardened by tragedy, they've found happiness. But that ephemeral warmth is shattered one day when Tanjirou finds his family slaughtered, and the lone survivor, his sister Nezuko, turned into a demon. To his surprise, however, Nezuko still showed signs of human emotion and thought.

Thus he embarked on a quest to fight demons and find a cure for his sister and make her human again.

Superhuman Physical Characteristics, Enhanced Senses, Clairvoyance (Can recognize and smell things normally impossible, such as the smell of the demon who killed his family years after the event or the intention of others. Can smell what kind of person someone is, their feelings and, to an extent, how strong they are), Genius Intelligence, Acrobatics, Proficient Hand-to-Hand Combatant (Evenly fought with Inosuke in a hand-to-hand duel), Limited Empathic Manipulation, and Morality Manipulation (Can force those who enter his mind to become kinder), Expert Swordsman, Rage Power (Can become rage filled in stressful situations. Broke Inosuke’s rib with one punch despite his injuries), Information Analysis (Can smell the weakness of his enemies), Absorption (The ore of his blade absorbs sunlight), Statistics Amplification (Breathing techniques make the user become much stronger and faster, Constant Flow gradually increases the strength of his strike with each blow, Increases his speed with Dance of the Fire God), Sensation Manipulation (Can create seemingly elemental effects), Regeneration Negation (High-Mid) (Tanjirou’s Dance of the Sun God negates demon’s regenerative abilities and makes the part that got slashed feel like it’s burning), Accelerated Development (Is an incredibly fast learner. Gained Pillar level skill much faster than normal person), Resistance to Fire Manipulation, Water Manipulation, Heat Manipulation (Demon Slayer Corps Garbs protect against fire, water and cold), Limited Air Manipulation, Confusion (Trained in a mountain with little air for a year, and survived in a bog, despite the confusion and dizziness he must have experienced), Pain Manipulation (Could fight despite fractures, broken ribs, and a damaged leg), Fear Manipulation, Paralysis Inducement (Withstood Rui’s aura. His aura was implied to be similar to Shinobu’s, which caused intense shuddering and lack of air)

All previous abilities plus, Body Control, Regeneration (Low. By breathing, hemorrhage can be ceased), Stealth Mastery (Snuck up on Kotetsu), Resistance to Sleep Manipulation (Escaped a deep sleep. Kills himself in his dream to escape sleep), Poison Manipulation (Could fight despite being struck by with deadly poison for extended periods of time)

All previous abilities plus, Precognition (Can predict opponent’s movement by smell), Social Influencing (Forced the naturally aggressive Genya to work with him just with the innocence of his eyes), Reactive Power Level (Gets faster the longer the fight goes on), Resistance to Sound Manipulation (Took powerful soundwaves, albeit they were weakened)

All previous abilities plus, Perception Manipulation, Information Analysis, Enhanced Sight (See-Through-World makes his perception of time slow down and makes user see directly opponent's muscles, blood flow and movements which allows them to predict their next moves), Resistance to Enhanced Senses, Precognition, Extrasensory Perception (With See-Through-World, his intent becomes completely concealed and impossible to detect), Enhanced Fear Manipulation, Paralysis Inducement (Immune to Muzan's aura that made Akaza bleed and paralyzed him in fear)

Attack Potency: Small Building level (Cut through a boulder), higher with Dance of the Fire God (Cut through Rui's most durable threads and nicked his neck which is even more durable than his threads) | At least Small Building level (Fought Enmu who was enhanced by Muzan's blood), higher with Dance of the Fire God (Can somewhat keep up with Base Daki), higher with Demon Slayer Mark (Overpowered Gyutaro and sliced off his head) | At least Small Building level, likely higher (Capable of fighting Hantengu’s emotion clones), higher with Demon Slayer Mark (Easily overpowered and cut off three of Hantengu’s emotion clones’ head. Can also cut the real Hantengu's neck) | At least Building level, at most City Block level+ (Kept up with and parried attacks from Akaza for an extended period of time), likely City Block level+ with Demon Slayer Mark (Completely outclassed Akaza and sliced off his head) | Multi-City Block level (When he was at his full power, he fought on par with a weakened and aged Muzan Kibutsuji and parried all of his arm whips by himself for 10 minutes straight, which even all of the Demon Slayers, including his previous form, working together couldn't do. Was integral in the final fight against Muzan, as he fought against him for a full hour and did most of the damage, as well as deal the final blow to him right before his death. At his peak, he was the strongest Demon Slayer of his time)

Stamina: High (Constantly keeps pushing himself to the limits of his stamina, much higher than previously), higher with Flame God's breathing technique (The same skill allowed his sickly father to dance for hours out in the snow while barely clothed, with his father saying that he could dance forever, though this is likely hyperbolic) | Extremely high (Trained for seven days non-stop with no food and only a small amount of water from rain, later drained for even greater stamina).

Standard Equipment: Nichirin sword (A blade made from metals that absorbed the light of the sun, it negates the regeneration of demons by decapitating them, as they are weak to sunlight), Demon Slayer Corps (Protect from the claws and slashing attacks from weaker demons, give resistance to heat and cold) | A higher quality sword.

Intelligence: Genius. Despite his hardheaded nature, Tanjirou is incredibly analytical. Even against opponents that heavily outmatch him in multiple categories, Tanjirou is capable of creating strategies to beat an opponent on the fly and in danger even if it results in his own death. Upon seeing a fighting style once, Tanjirou can analyze it, and it’s even possible for him to accomplish such a feat even in the midst of a constantly shifting location where he lacks any environmental advantage or benefit. Even if the opponent offers no real details or specifics on their power, Tanjirou can pick up subtle phrases and words used throughout their fights to deduce the ability. He's even conjured new abilities and utilized them effectively upon using them once, even able to combine techniques despite not being fully proficient in one of them.

Weaknesses: Cannot lie convincingly, and cannot use Fire God breath techniques more than a few times without exhausting himself and doing so after using Breath of Water techniques wrecks havoc on his body. Limit Break has a time limit, as he cannot keep that form up for long. | Demon Slayer Mark takes a toll on his stamina.

Enhanced Smell: Tanjiro can smell things normally impossible, and has integrated this into his fighting. He can smell multiple elements, such as:

Breathing Techniques: The technique used by most demon hunters, though many have their personal version, it accelerates blood flow and heartbeat, and increases body temperature. It "thrills" the bones and muscles in the body, making them comparable in strength to those of demons.

Killua Zoldyck (Hunter X Hunter) Killua's Profile (Speed was equalized. Both were at their 8-A versions)

Geralt of Rivia (The Witcher) Geralt's Profile (Both were 8-C, Geralt had access to his potions)