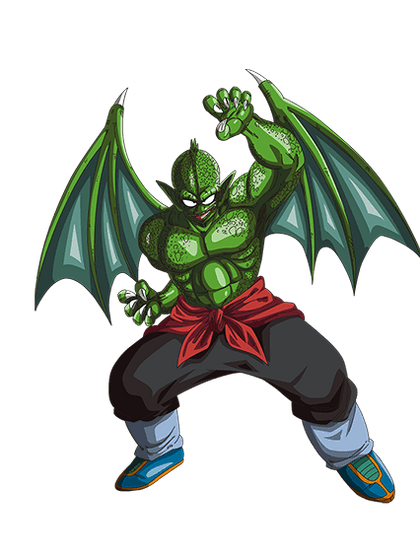 Tambourine is a mutated Namekian, and one of King Piccolo's first sons.

Age: At the time of his death, around a day old

Powers and Abilities: Superhuman Physical Characteristics, Acrobatics, Martial Arts, Flight, Ki Manipulation, Breath Attack, Soul Banishment (Those killed by a demon clansman do not cross over, they are eternally trapped between the afterlife and the mortal realm. Essentially a Limbo), Resistance to Fragrance Manipulation (Was not bothered by Bacterian's odor)

Attack Potency: At least Large Building level (Much more powerful than Cymbal. At the time of his birth, he was the strongest of King Piccolo's sons. Casually killed Krillin and many other martial artists and easily defeated an exhausted Goku)

Intelligence: Unknown. Seems to be a capable fighter.