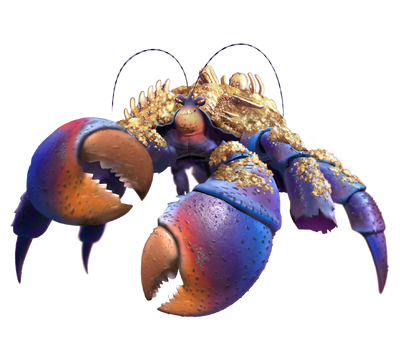 Tamatoa is an enormous monster from the realm of Lalotai who serves as an antagonist in the 2016 animated Disney film Moana. He resembles a colossal coconut crab who, loathing his reputation as a bottom feeder, has coated his shell in countless shiny treasures and trinkets. He longs to add the Heart of Te Fiti to his collection to further elevate his status to that of a god, and it is partially because of this that he has been the long-standing enemy of Maui.

Tamatoa's obsession with physical perfection and callousness to those he deems beneath himself make him the living antithesis of the film's overarching messages of being true to yourself and not letting your own insecurities or the will of others define who you really are.

Powers and Abilities: Superhuman Physical Characteristics, Natural Weaponry (Via claws and legs), Large Size (Type 1), Immortality (Type 1), Able to use bioluminescence in order to shock and throw off his foes, Regeneration (Low-Mid, can regenerate lost limbs, though it takes a very long time), Camouflage, Broadway Force, 4th Wall Awareness (He spoke to the audience)

Attack Potency: At least Island level (While notably weaker than the demigod at his strongest, he was still considered Maui's most prominent foe and battled against him on multiple occasions. However, one of these fights cost Tamatoa a leg. When Maui didn't have his fishhook, Tamatoa actually proved to be vastly more powerful.)

Lifting Strength: At least Class E, possibly Stellar (Physically comparable to Maui, Ragdolled him when the demigod was out of practice with his fishhook)

Intelligence: Presumably quite high, as he has been around for more than a thousand years, though his own obsessive and psychotic nature make it far easier than it should be for him to be distracted or tricked

Weaknesses: If he is knocked onto his back, it is very difficult for him to get back up. Is incredibly vain and arrogant, to the point he refuses to remove his shell to heal his lost leg, and will happily rant about his greatness for a long period of time.

Retrieved from "https://vsbattles.fandom.com/wiki/Tamatoa?oldid=5674971"
Community content is available under CC-BY-SA unless otherwise noted.