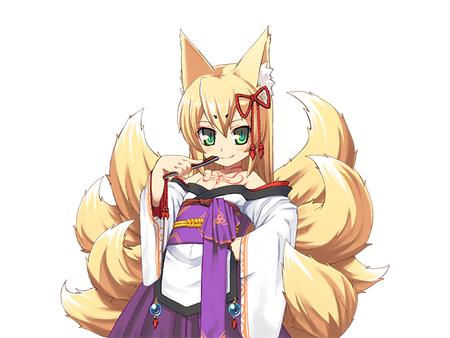 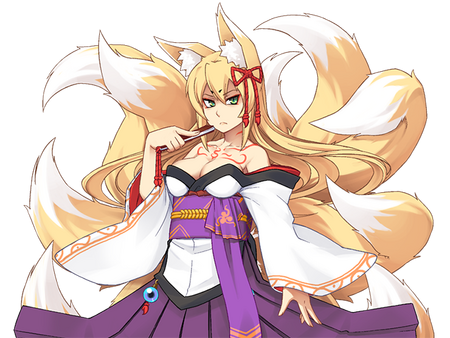 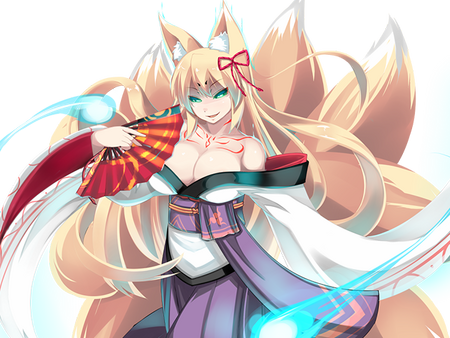 Tamamo, originally known as Tamamo no Mae, is one of the Four Heavenly Knights serving Alipheese Fateburn XVIth. Unlike other knights, Tamamo was actually close to Alice, as she acted as her mentor, especially after Alice XV's death. In fact, she reportedly served as the mentor for several generations of monster lords in a row.

Also unlike other knights, Tamamo is relatively at peace with humanity, living in Yamatai as one of its many "gods" there, and is the only one to not oppose Luka directly until his arrival at the Monster Lord's Castle, where she fought him to train his ability to use Gnome.

Her true identity is that of Tamamo no Mae, one of the Six Ancestors from which every monster is a descendant of. More precisely, Tamamo is the ancestor of every single beast-type monsters, with Kitsunes as the main representative. She was sealed alongside her sisters and Alice I herself back in the Great Monster War. However, she managed to get through the seal partially by creating a weaker version of herself to escape the seal and make sure that Ilias kept to her promise of not destroying all monsters.

Age: At least hundreds of thousands of years old

Range: Extended melee range, hundreds of kilometers with magic (Comparable to other types of magic capable of creating earthquakes)

Intelligence: At least Gifted (Considered to have "high" intelligence. She has several hundred years of experience and is the one behind the education of all Monster Lords after Black Alice)

Standard Tactics: Her Ancestor self uses mostly mind manipulation and charms, while her weaker self focuses more on physical attacks

Weaknesses: Her power depends on the phase of the moon

Key: Base | Tamamo no Mae