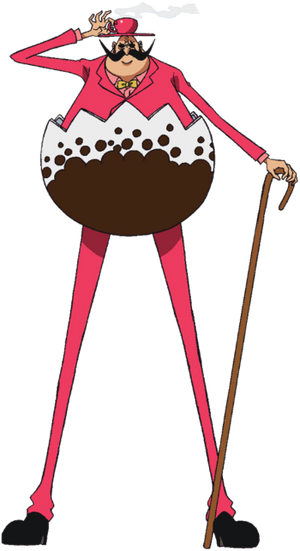 Baron Tamago is a combatant of the Big Mom Pirates, who originates from the Longleg Tribe. He and his partner Pekoms are responsible for collecting the monthly payment of sweets from Fishman Island in exchange for Big Mom's protection.

Like a lot of people of her crew, Tamago is scared of Big Mom and wishes to avoid bringing her bad news, as he does not want to be the target of her resulting rage. However he still dares to disagree and try to correct her when she is angry, such as when she suggested to accept the Straw Hat's offer of treasure instead of candy.

As Tamago and Pedro clashed, Tamago demanded to know why Pedro had returned despite his shortened lifespan. Pedro explained that he had done so for the Straw Hats, whom he believed would one day surpass him and Tamago while causing the world to transition into its "dawn", but clarified that he had no intention of dying until they had achieved their goals as he cut Tamago in half, causing a giant yolk to fly out of his body.

Powers and Abilities: Superhuman Physical Characteristics, Physiology Changed to that of an egg due to Devil Fruit, Transformation and Regeneration (With each time Tamago's body is cracked open, he evolves from the yolk produced from his body, gradually turning his body from human to that of a chicken, increasing his power each time up to 3 times), Adept Swordsman, Haki (Armament and Observation Haki user), Martial Arts (Trained in the use of his legs), High Resistance to electrical based attacks due to suit.

Stamina: Not much is known about his stamina reserves, but seeing as he is one of the members of the Big Mom Pirates and is from a verse with ridiculous levels of stamina it can be assumed they are vastly superhuman 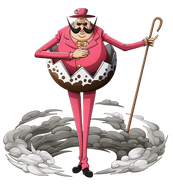 Retrieved from "https://vsbattles.fandom.com/wiki/Tamago?oldid=5878347"
Community content is available under CC-BY-SA unless otherwise noted.