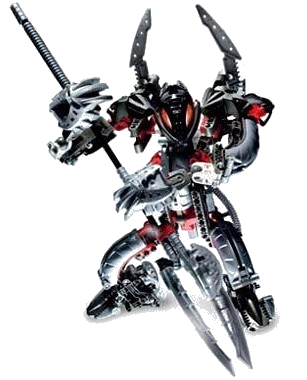 Takutanuva is the extremely powerful fusion of the Makuta and Takanuva, formed when the two of them fell into the Energized Protodermis. The fusion only lasted for a couple minutes, in which time it opened the gate to Metru Nui, resurrected Jaller, and then was crushed by the gate, unfusing it back into a dead Takanuva and Teridax, who survived in his Antidermis form.

Age: A couple of minutes

Classification: Fusion of Teridax and Takanuva

Powers and Abilities: Superhuman Physical Characteristics, Flight (He can fly by growing wings), Makuta Physiology, Darkness Manipulation (Possesses mastery over elemental Shadow), Energy Manipulation, Light Manipulation (Possesses mastery over elemental Light), Matter Manipulation (Transformed liquid Protodermis into solid spheres and pillars, capable of creating Rahi from Protodermis, and breaking down objects on a molecular level through various means), Mind Manipulation (His mental power should be comparable to Teridax's), Pain Manipulation (Teridax's mental powers can induce pain in others), Soul Manipulation (Can move the souls of others into different bodies and resurrect the dead by moving their consciousness into a new body and sacrificing his life), Virus Manipulation (Can engineer and control energy-based viruses that can infect mechanical or biomechanical beings, or create new Rahi), Absorption (Can absorb others and take on their traits, even in his Antidermis form, and can absorb energy and drain it from others), Corruption (Types 2 and 3; Makuta can infect Kanohi with Kraata, and seventh-stage Kraata can do this from a distance), Illusion Creation (Can create complex, long-term illusions that near-perfectly recreate people and their surroundings, and can even create illusory figures that have from the darkness in his opponent's hearts, replicating their powers and skill), Inorganic Physiology (Type 1), Non-Corporeal (In his true form, Takutanuva is a mass of Antidermis, which is pure energy), Possession (Can possess unoccupied bodies), Self-Sustenance (Types 1, 2, and 3), Shapeshifting and Sizeshifting, Telepathy (Can telepathically communicate with people across the Matoran Universe and read the minds of others, anticipating all of their movements and attacks from their thoughts), Teleportation, Transmutation (Can transmute Protodermis and light into Shadow or Light), Longevity, Immortality (Type 6), Resistance to Telepathy/Mind Manipulation (Has the combined mental defenses of Teridax and Takanuva)

Attack Potency: At least Island level (Has the combined power of Teridax and Takanuva, and is considerably stronger than either), can ignore conventional durability with many of his abilities.

Lifting Strength: At least Class M (Should be comparable or greater in strength to Roodaka, who once ripped Krahka, in the form of a Troller, a giant Rahi who can fit a city block in its mouth, from the ground with a single hand), possibly higher (Brutaka claims to have uprooted mountains, and Takutanuva lifted the gate to Metru Nui).

Durability: At least Island level. His immortality makes him hard to kill, as he can abandon his bodies whenever necessary.

Stamina: Extremely high. Takutanuva's stamina should be at least comparable to that of Toa, and the Toa Mangai fought against the Kanohi Dragon for an entire month. Teridax, one of his components, also fought against Icarax for several hours straight.

Range: Extended melee range, Kilometers (His range should be at least comparable to Pohatu's who destroyed the massive Odina Fortress with a single timed Stone Blast) to Hundreds of Kilometers (Can appear in shadows across all of Mata Nui, and his Power Scream can be heard from anywhere on Mata Nui) to Planetary (Takutanuva can teleport and affect things across the Matoran Universe) with his abilities

Intelligence: Genius. Takutanuva should be at least as intelligent as Teridax, a brilliant strategist, and he can look at any situation from a perfectly neutral viewpoint.

Weaknesses: Takutanuva can only use one of the Kraata powers at a time. In his Antidermis form, he can only access his mental powers, is weaker than normal, and needs a body to contain his essence so he doesn’t dissipate.

Toa of Light: Takutanuva has the powers of Takanuva, the only Toa of Light, and can thus control, create, and absorb Light however he pleases. He can fire focused beams of light, create solid or intangible holograms, absorb light, and alter its appearance to disguise his real appearance. By changing how light reflects off his armor, he can blend into his environment and change colors. He can absorb light, as well, and with practice and discipline, can even move at the speed of light.

Makuta: Takutanuva, as a fusion containing Teridax, is one of the Makuta, a powerful race of hundred beings created at the beginning of the Matoran Universe by Mata Nui. Although once a biomechanical being, Teridax had evolved past a physical body like the rest of his kind, taking on a form of pure Antidermis, though he requires a body to fully utilize his power and prevent his essence from drifting apart.

Kraata Powers: As with most Makuta, Takutanuva possesses all forty-two of the powers used by the forty-two variants of Kraata and, thus, Rahkshi. Some of these powers are already provided otherwise due to his nature as a Makuta, such as shapeshifting and mind reading. He can only have one of these powers active at a time, but he can easily and rapidly switch between them.