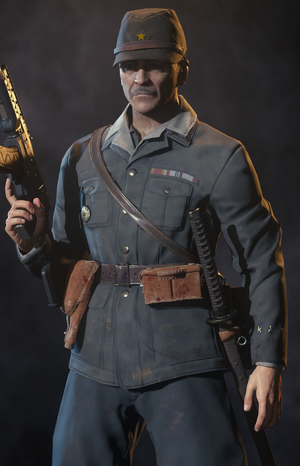 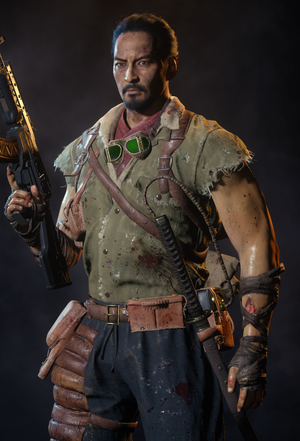 Captain Takeo Masaki (Japanese: 正木 武雄 Masaki Takeo) was a Japanese soldier who fought in the Imperial Japanese Army, and is a playable main character in Zombies. In the Ultimis timeline, Takeo Masaki was dispatched by the Emperor to oversee the work of Group 935 and Division 9 at the Rising Sun facility. He was betrayed by the Emperor, who gave orders to take Takeo prisoner and authorized experimentation on. On July 15th, 1945, Dr. Edward Richtofen traveled to the Siberian Facility to do further research on "live specimens". Group 935 begins transferring three test subjects for experimentation: Nikolai, Pablo, and Takeo. Alongside fellow test subjects, an American soldier named "Tank" Dempsey, who had replaced the Mexican spy who was accidentatally killed named Pablo Marinus, and a Soviet soldier named Nikolai Belinski, each are exposed to serums and Element 115, causing memory loss, and in Takeo's case, loss of interaction. Takeo along with the other test subjects are reawakened by Richtofen. With no memory of who they are or who Richtofen is, Dempsey, along with Nikolai and Takeo, agree to help him. He unwittingly helps Richtofen complete his grand scheme of replacing Samantha Maxis as the Demonic Announcer in Moon.

In the Origins timeline, he is a part of PRIMIS, an ancient hero who fought in the Great War against the Apothicons, creatures who destroys every dimension and timelines, after the Great War, he wants to save every dimension and timelines from the Apothicons and make a safe world of the Children. In Black Ops 4, Takeo and the others manage to break the cycle once and for all under the leadership of Nikolai.

Tier: 9-C with standard weapons, 9-B by himself, with various explosives and more powerful firearms. 9-A with the Ray Gun, Unknown with pack-a-punched and other wonder weapons.

Superhuman Physical Characteristics, Weapon Mastery (Can use any weapon, no matter what time period it's from or how complex it is with incredible efficiency), Master Swordsman (Is a skilled Katana user), Longevity, Regeneration (Mid-Low. Regenerates from being hit by zombies constantly), Non-Physical Interaction (Can interact with Keepers), Statistics Amplification (Can boost his powers via pack-a-punch and with various perks) Resistance to Corruption (Unaffected by zombie bites), Biological Manipulation (Can breathe in spores in Zetsubou no Shima with only minor inconveniences, which is capable of mutating zombies into plant monsters called Thrashers), Poison Manipulation (Can breathe in Nova 6 gas and survive, which is capable of killing anyone who breathes the gas in 6 seconds), Fire Manipulation (Can tank flamethrower attacks from the Panzersoldat), Electricity Manipulation (Can tank electrical shocks from various sources including the Avogadro), and Soul Manipulation (As of Zetsubou no Shima, Primis Takeo lacks a soul)

Transformation (Via In Plain Sight, players can turn into zombies), Statistics Amplification (Via Sword Flay, players gain a 6x increase in melee damage), Teleportation (Via Anywhere But Here!, players can teleport to a random location), Resistance to Explosion Manipulation (Via Danger Closest, negates explosive damage toward a player), Statistics Reduction (Via summoning Insta-Kill. Insta-Kills are stated to set all enemy health to 1), Fire Manipulation (Via Burned Out, releases a fire explosion whenever the player is hit), Electricity Manipulation (Via Pop Shocks, releases an electrical burst whenever the player is hit), Explosion Manipulation (Via Slaughter Slide, can send 2 explosive orbs via sliding), Death Manipulation (Via summoning Nukes and with Mind Blown. Nukes kill all enemies in the general location and Mind Blown instantly gibs the heads of all enemies in sight upon activation), Paralysis Inducement (Via Fear in Headlights, all enemies will freeze in place as long as their in eyesight), Time Stop (Via Killing Time. Stops time for 20 seconds, and any damage dealt to enemies during stopped time will mark them for death, and will be killed immediately upon time resuming progression), Statistics Amplification (Via Ephemeral Enhancement, can instantly Pack-a-Punch the current gun they're holding), Summoning (Via Fatal Contraption, summons a minigun)

Attack Potency: Street level with varying firearms, Wall level physically, with various explosives, and more powerful firearms. (Can use the Annihilator without any difficulty, with the Annihilator being stated to be so powerful that it would break the arm of any non augmented soldier. Can send zombies flying with the one inch punch. Comparable to Tank Dempsey, who smashes a zombie's skull in Origins. Small Building level with the Ray Gun (In the main campaign, a world nearly devoid of element 115, the Ray Gun was capable of destroying tanks in one shot), Unknown with pack a punched and other wonder weapons)

Speed: Peak Human (Can run away from hordes of zombies, even Hellhounds, and much faster-running zombies) Supersonic attack speed with most weapons.

Lifting Strength: Superhuman (Can carry multiple firearms, a zombie shield, and much more without tiring)

Striking Strength: Wall class (Comparable to Dempsey, who managed to kill a Zombie by smashing its skull. Can send zombies flying with the One Inch Punch)

Durability: At least Wall level (Can endure hits that generally kill average soldiers with ease; fought against the templar zombies, which are weaker zombies due to years of decay, yet strong enough to casually tear off a man's head), higher with Juggernog (Can take up to 5 hits from zombies, who can casually decapitate soldiers)

Intelligence: Above Average as Ultimis Takeo. Takeo is noticeably more intelligent than either Ultimis Dempsey or Nikolai, however it is implied that experimentation from Group 935 may have affected his logical thinking. He was someone who was very reserved, and would not talk unless absolutely necessary and was highly vigilant at all times. Takeo is also an exceptional soldier with years of experience on the battlefield.

Gifted as Primis Takeo. He is capable of building complex contraptions just by looking at the blueprints such as the shield, a functional gas mask, the Ragnarok DG-4, the KT-4, and can follow complex instructions from the likes of Dr. Gersch and S.O.P.H.I.A. Primis Takeo is also a highly skilled soldier with years of experience on the battlefield.

Weaknesses: Fanatically loyal to the Emperor as Ultimis Takeo. None as Primis Takeo. 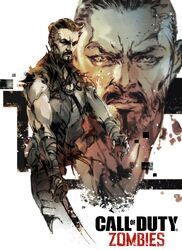 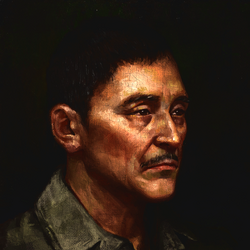 The Path of Sorrows
Add a photo to this gallery

Retrieved from "https://vsbattles.fandom.com/wiki/Takeo_Masaki?oldid=6241877"
Community content is available under CC-BY-SA unless otherwise noted.