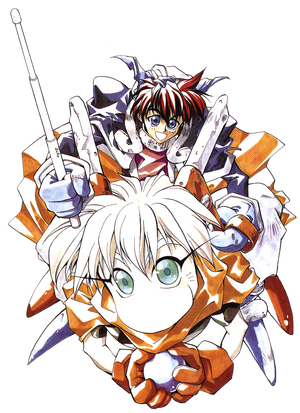 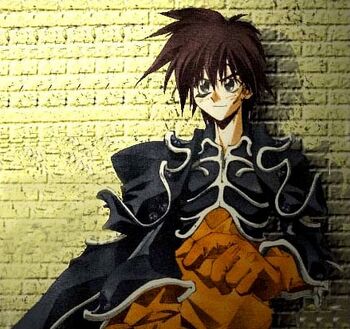 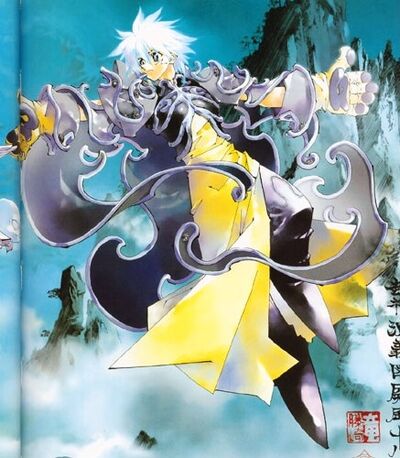 Taikoubou (太公望 Taikōbō?, Tai Gong Wang, Kyou Shiga, Jiang Ziya) is the main character of Hoshin Engi. Taikōubōu's original name was Ryobōu. He was the son of the Qiang chief and lived in the human world until he was 12. When he was 12, the Emperess Dakki decided that the Emperor be buried with 1000 times the normal amount. So that the people wouldn't revolt she had them captured from other tribes because then no one would care. Most of these were Qiangs and almost everyone, including Ryobou's family, were captured and killed. At that moment, the head of the Kongrong Mountains Genshi Tenson approached him and offered to train him to become a Sennin. Ryobōu accepted and began training immediately. He is a disciple at Konronsan and Genshitenson's best pupil. He received the Hoshin Project from Genshitenson, and became a strategist to defeat the collapsing Yin Dynasty and to help the Buo of the Shu. Although he wears very strange clothes, he has the sharpest mind in Konron. Taikoubou was the son of the leader of the Kyo tribe, and was named Ryo Bo, but he lost his parents in a Yin human hunt. After twelve years on earth, he became a disciple, and with 30 years of study, attained Senin level power. After 60 years of training, Taikoubou began slacking off so that he could be sent to the human world. He was then given leadership of the Hoshin Project and sent into the human world to carry it out. To help him with the job he was given the Paopie Dashinben and the Reiju Supushan. He immediately targeted Dakki, but was captured and almost killed through the use of the Taibon. He was saved by Kō Hiko and set out to make more allies. After meeting the paopie human Nataku, the genius Youzen, the bandit Raishinshi and the princes of Yin, Taikoubou began to realize that humans such as King Chuuoh and the princes were on the Hoshin List and that people that weren't on the list were being sealed such as the former first queen. He reported back to Genshi Tenson, who explained the true purpose of the Houshin Project. He then came back to the human world and became allies with the Seihakuko Ki Shō. Taikoubou was made the Gunshi of Seiki and began the war against Yin after Ki Shō's death. Though, Taikoubou is still an average Senin with a low rank, he is the personal disciple of the leader of Konronsan, Genshitenson, so his position in the Senkai (spirit world) is high. At the beginning of the story, he receives a retractable baton-shaped Paopei (Magic Tool) called 'Dashinben.'which grants him the power to create and control wind (Later, because of the Orb of Revival, the Dashinben gets an upgrade, a larger shape and improved abilities.) Eventually, his Dashinben is upgraded by fusing with the paopei 'Kyokoki' that can absorb Konronsan's energy for recovery, and the super paopei, 'Taikyokuzu,' that negates all other paopei's power,draw magic seals and can heal injuries. Basically, his speciality is fighting by wits, and using cleverness to swindle his enemies, so that sometimes even his allies boo him. His constant companion, main ally, and mode of transportation is the spirit beast, Supushan. Taikobo's real age is at least 72 years old, and contrary to his boyish appearance, love of peaches and sweet things, and dislike of shots and medicine, his speech and mannerisms are that of an old man. His personality is aloof, and he has a strong belief in a peaceful human world. Additionally, he is left-handed, but during the fight with Inkou (the older), he lost his left arm up to the elbow. Soon after, he received an artificial arm created by Taiitsu Shinjin. Although Taikoubou is often criticized by other characters for being very 'un-protagonist-like,' he was voted first in a Jump magazine character poll twice. From time to time, the author changes his drawing into a simple shape, with a circle and two points for a head and a stick figure like body. The last volume of the Kanzenban came with a limited edition plush toy of this form.

Fukki (伏羲?, Fu Xi) is one of the original people, and the creator of the Houshin plan. He has the peopei Dashinben, Taikyokuzu, Chusenjin (snow that damages the soul), and Bansenjin. Fearing Jyoka's revival, he chose to remain and not merge with the earth like the other original people. He became a human named Ou Eki and approached the Sandai Sennin with the Houshin plan, becoming Genshitenson's disciple. Genshitenson, realizing O Eki's ability to split his soul, divided him into two, returning one to O Eki (who would be traded with Tsuten Kyoshu for Yozen, and would become Otenkun) and keeping the other, eventually placing it in Ryo Bo, a deceased baby of the Kyou tribe (who would become Taikobou). Ou Eki loses his memories of being one of the original people, and does not regain them until Taikoubou and Otenkun merge to create Fukki. Fukki is the combination of Taikoubou and Ou Tenkun into one single body. Fukki can also be called Ou Eki, Ou Tenkun or Taikoubou. He is all of them combined into one. After merging, Fukki (who still identifies himself as Taikoubou since he is the dominant personality) retains the ability to split,and can return to being Taikoubou and Otenkun at will. He has a bit of a double personality and he holds the super paopei Taikyoukuzu, which was given to him by Taijyuroukun. Like Jyoka, Fukki is also one of the alien race (First People) which landed on Earth a very long time ago. After imprisoning Jyoka in her glass prison, Fukki watched as his other three pioneering friends merged with the earth and became part of it. He, alone, stayed behind to orchestrate the "Houshin Project" of which the ultimate aim is to rid the world of the influence of Jyoka. He simply could not stand the knowledge that Jyoka was controlling this world all on her whim. That was all.

Powers and Abilities: Superhuman Physical Characteristics, Ability to use Paopei, Ability to survive in space, Immortality (Types 1 and 3), Genius level strategic intelligence, in his other stronger forms he has Flight, Telepathy, Dimensional Manipulation, Energy Projection, and Manipulation, Soul Dissolving Attacks, Regeneration (Low-High), The ability to absorb energy from allies, Can create forcefields, advanced stealth capabilities that can hide him from detection from beings that can see anywhere on earth and across dimensions, Breaking the Fourth Wall

Attack Potency: Large Mountain level (Can repel Bunchuu's Kinben with Daishinben, also froze Chou Koumei's true form) | Country level, likely higher than as Taikoubou | Country level (Barring Final Body Jyoka, he was the strongest character out of the rest of the cast, also Shinkouhyou compared his power to the Raikouben, the strongest of the Super Paopei which even while operating at minimal power could span an entire large country in range) | At least Multi-Continent level (On par with Jyoka who can raze planets)

Speed: Massively Hypersonic+ (Able to react to and counter a blast from the Raikouben) | Massively Hypersonic+ | Sub-Relativistic (Superior to Dakki) | Sub-Relativistic (Faster than before, Intercepted and redirected an energy blast created by Jyoka thrown from relatively close proximity. Said energy blasts are likely on the same level of speed as the Raikouben given how fast they were able to fly away from her in relation to how far she was able to fly herself)

Striking Strength: Large Mountain Class | Country Class via power-scaling | Country Class (Punches were said to be equal in power to an attack from the Raikouben) | At least Multi-Continent Class

Range: Capable of attacking from the top of the mesosphere (Roughly 90 kilometers above earth's surface) | A couple hundred meters with the Chuu Sen Jin, planetary via Taiykouzuku,  same as Taikoubou otherwise | Average human melee range with punches, same as Base Fukki otherwise | Planetary via power-scaling

Standard Equipment: His spirit beast Suppuushan (Who appears as a weird flying hippo with a full head of hair, he can be used as transportation, and he has a transformed state where he is faster and stronger and can eat Paopei energy). His Paopei dashinben (Which appears as a wooden stick that can control the air and create barriers, blades, tornadoes, and various other types of attacks), his Paopei Karyuuhou (which can create fire-based attacks, he gave this up later since it didn't really suit him), his Paopei Kyou kouki, which allows him to absorb extra energy from Kongrong mountain to increase his power, his final Paopei Taikyokuzu (Which can shut down other Paopei, absorb energy from allies, and allow his and his allies' attacks to harm other beings souls)

Intelligence: Master of strategy, his command allowed an army to easily defeat an enemy army that outnumbered them by multiple times, masterminded a plan to defeat Jyoka, an immortal alien who had been controlling earth's history for millions of years, outsmarts most of his opponents, many years of battle experience, not above fighting dirty

Retrieved from "https://vsbattles.fandom.com/wiki/Taikoubou?oldid=7001562"
Community content is available under CC-BY-SA unless otherwise noted.