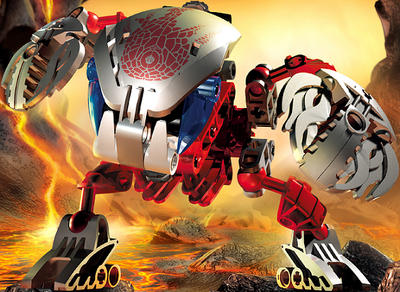 Tahnok-Kal is the leader of the Bohrok-Kal, an elite squad of six mutated Bohrok made by the Bahrag as a failsafe in the event that they were somehow defeated, meant to reawaken them. It was originally an Av-Matoran, prior to its transformation into a Tahnok, and then its mutation into its current form.

Powers and Abilities: Superhuman Physical Characteristics, Electricity Manipulation and Absorption, Forcefield Creation (It can make electricity-based shields), Telepathy, Fusionism (Can fuse with other Bohrok-Kal), Enhanced Senses with Ja-Kal and Yo-Kal, X-Ray Vision with Bo-Kal, Resistance to heat and cold with Su-Kal, Longevity

Attack Potency: City level+ (Superior to regular Bohrok, and comparable to the Toa Nuva, such as Pohatu, who reduced Odina Fortress to dust. Defeated the Exo-Toa alongside the other Bohrok-Kal).

Speed: Massively Hypersonic+ (Comparable to Toa, who can fight with Avohkah, lightning-based Rahi that possess the properties of lightning and were mistaken for lightning bolts, as well as Rahkshi and Makuta who can manipulate electricity. Tahnok-Kal itself is an electricity manipulator), possibly Relativistic (The Toa Inika could react to and dodge Umbra in his light form).

Intelligence: Tahnok-Kal has the animalistic cunning of the Bohrok, enhanced further with a deep analytical intelligence.

Retrieved from "https://vsbattles.fandom.com/wiki/Tahnok-Kal?oldid=6520574"
Community content is available under CC-BY-SA unless otherwise noted.