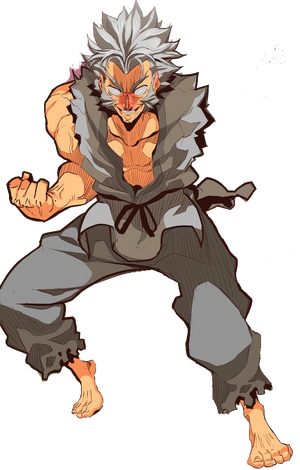 Taejin Jin is Mori Jin's adoptive grandfather and the founder of Renewal Taekwondo. Like his grandson, he refuses to utilize Charyeok, and thus relies entirely on his own technique and physical conditioning. Despite this, he is able to keep up with numerous Charyeok users with ease and single-handedly defeated The Six, sinking ten percent of Korea in the process.

Lifting Strength: At least Class E, possibly Class Y (Wrestled with a clone of the Monkey King in his youth)

Stamina: High (Can easily fight for hours without getting winded, could continue fighting even after cutting off his own arm and did so without flinching)

Intelligence: Taejin is an absolutely exceptional hand-to-hand combatant, overpowering the entirety of The Six with ease despite the fact that they were the pinnacle of their respective combat forms and were aided with National Treasure-class weaponry as well as Borrowed Power. Taejin fights with brutal efficiency, never using more force than necessary and aiming for weak spots such as the neck and the joints, with each blow seeking to end the target in a single hit. This has left him virtually undefeated in all of his battles, and Seungcheol Baek believes that Taejin simply gave himself rather than losing his fight. He also taught his similarly talented grandson everything he knew, allowing the teenager to utterly crush his opposition until the latter encountered the Judges. However, his love of a good fight, as well as his hot-headedness has blinded him to his objectives on numerous occasions, leading to the deaths of his entire squad while he was busy fighting the Monkey King's clone.

Weaknesses: Taejin is somewhat arrogant, reckless, and short-sighted at times, Loves the feeling of a brawl and can often get absorbed in it | His lost arm bothers him and he is incredibly petty about it 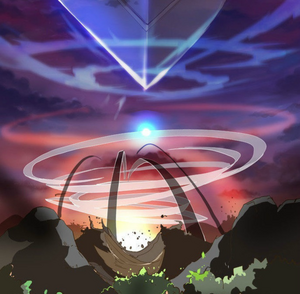 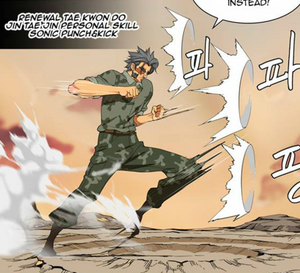 Effects
Add a photo to this gallery