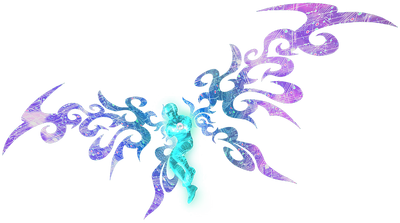 Tabuu is the leader of the Subspace Army, the main antagonist and final boss of Super Smash Bros. Brawls Adventure Mode: The Subspace Emissary. He is a powerful, supernatural entity who resides in Subspace. He uses the Subspace Bombs to send entire locations to his dimension, where he absorbs their power to increase his own.

Powers and Abilities: Superhuman Physical Characteristics, Flight, Reality Warping, Electricity Manipulation, Teleportation (Can also leave an explosion behind from where he last was at), Energy Projection, Afterimage Creation, Shapeshifting, Duplication (Of himself and others), Thread Manipulation (Can create Chains of Light), Body Puppetry (Used his Chains of Light to control Master Hand to the level in which the latter was more apart of Subspace than the World of Trophies), Size Manipulation, Forcefield Creation, Resurrection (Resurrected all of the bosses throughout the game, from Petey Piranha to Rayquaza to Duon), Spatial Manipulation, Can create explosive afterimages, Heat Vision

Attack Potency: At least Universe level+ (His defeat causes the Subspace realm to be destroyed. The Subspace realm is able to contain the space sent from the World of Trophies by their weapons including the Subspace Gunship which is "capable of infinitely rending space". One Shotted Master Hand), able to ignore durability via Chains of Light & Off-Waves

Speed: Massively FTL+ (Can easily keep up with Master Hand)

Intelligence: Tactical genius. Studied the World of Trophies to come up with a plan to take over the world. Some of the feats he did include discovering the primordial substance Mr. Game & Watch was made out of and used him to make the Subspace Army, taking over the Isle of the Ancients, making all of the R.O.Bs his slaves, took over Meta Knight's Halberd, deceiving Ganondorf, Bowser, and Wario using Master Hand, and more

Weaknesses: His wings can be broken, causing a delay in his most powerful attacks. Most of his moves, despite being able to deal massive damage, area rather predictable and some can even leave him open for attacks. Cannot leave Subspace