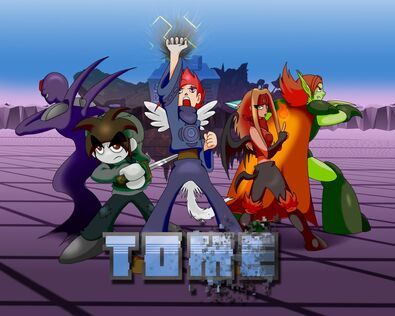 Within this expansive, interactive world, players of all ages, gender and race from across the globe unite together to a single community of social networking and gaming. With an unprecedented level of customization, you can create a personal avatar character to interact with friends and battle foes…and Netking Software’s unparalleled and renowned virtual reality system dictates your thoughts and actions instantly to create an incredibly realistic sense of life, making it the most immensely popular and sought-after game title in the world to date.

TOME is a very powerful verse. The entire world consists of 3 City sized areas. Sanctuary, Mech City, and Lavendera. A deadly force called the Forbidden Power threatens the very existence of the world, and many of this verse's characters have survived the full force of it. The top tiers are those who are able to overpower this force entirely. Even the fodder of the verse is impressive as they can blow straight through the landscape typically yielding Multi-City block results.

Retrieved from "https://vsbattles.fandom.com/wiki/TOME_(Verse)?oldid=6481133"
Community content is available under CC-BY-SA unless otherwise noted.