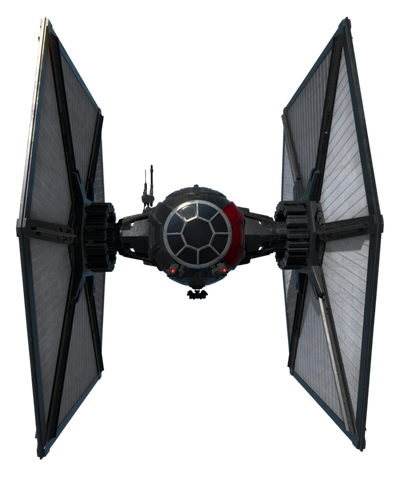 The TIE/sf space superiority fighter, also known as the Special Forces TIE fighter, is a twin seater multi-role starfighter manufactured by Sienar-Jaemus Fleet Systems. This fighter is used by the elite operatives of the First Order military’s Special Forces and designed to fulfil roles ranging from reconnaissance to interception to even light bombing. It is unique in that the central pod houses a pilot as well as a gunner behind them to operate the craft’s weapon systems. Equipped with two pairs of powerful laser cannons, a concussion missile launcher, reasonably powerful deflector shields, even a long range hyperdrive, the TIE/sf is a versatile and deadly craft not to be taken lightly despite some shortcomings in its design.

Needed prerequisite for use: Trained crew of two (one to act as pilot and one to act as weapons officer, though the pilot alone can presumably fly the craft and operate all the weapon systems)

Speed: At least Transonic atmospheric speed (At the very least as fast as if not faster than the standard First Order TIE/fo). Can accelerate continuously to Sub-Relativistic+ speeds in space (Should be more than capable of matching the realspace speeds of the likes of the Millennium Falcon. Noted to be quite swift by Poe Dameron, a seasoned X-wing pilot). Massively FTL+ travel via hyperspace (Equipped with a Class 2 hyperdrive. Should thus be this fast)

Retrieved from "https://vsbattles.fandom.com/wiki/TIE/sf_Space_Superiority_Fighter?oldid=6373030"
Community content is available under CC-BY-SA unless otherwise noted.