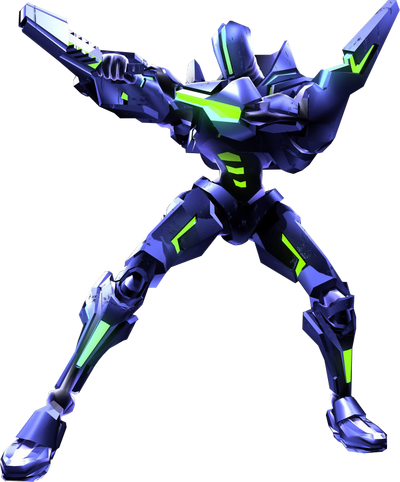 Sylux is a powerful Bounty Hunter who appeared in Metroid Prime Hunters. Very little is known about Sylux, other than that it harbors a strong hatred for the Galactic Federation, and Samus Aran likely by association.

Currently, he has only been shown to have a major role in Metroid Prime Hunters, however, his appearance in both Federation Force and Corruption suggest he will have a bigger role to play in the future.

Attack Potency: Unknown, at least Town level (The Shock Coil is a prototype federation weapon that emits a concentrated beam of high-density Neutrinos within a set radius, should be comparable to the other hunters, his weapon can bypass durability because it can shoot neutrinos), likely higher with Delano 7

Speed: Unknown, can use the Delano 7 to reach Massively FTL+ travel speed (Chased after Samus' gunship after the events of Corruption)

Intelligence: Gifted (Has been able to breach into the Galactic Federation undetected, stealing what would likely be a heavily guarded Metroid egg. Contended with Samus Aran.)