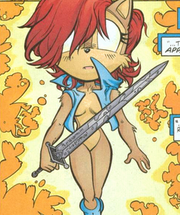 The Sword of Acorns was a magical sword forged from the Source Of All along with the Crown of Acorns.

Name: The Sword of Acorns

Powers and Abilities: Magical Powers, Paralysis Inducement (Can lock individuals as powerful as Enerjak in place), Telepathy (It can read minds), Possession (It can possess the wielder to save their life), Precognition (The Sword of Acorns is capable of showing the future), Power Bestowal, Statistics Amplification, Holy Manipulation, Energy Manipulation, Conceptual Manipulation (Type 2), Non-Physical Interaction, Power Absorption (The Sword can drain and absorb the powers of others), Existence Erasure, Healing (Healed Uncle Chuck after he was fatally wounded), Willpower Restoration (Capable of restoring free will), Power Nullification/Statistics Reduction (The Sword of Acorns’ presence can negate and reverse the effects of magic and weaken opponents), Can revert Transmutation and Biological Manipulation, Flight, Portal Creation and Dimensional Travel (Can create dimensional rifts, which returned Ixis Naugus from banishment), and Higher-Dimensional Manipulation (Capable of breaching and affecting higher dimensions such as the Chaos Force)

Speed: None, Varies depending on wielder (Can by swung at Massively FTL+ by Sonic, and Sally and Immeasurable speeds by Master Mogul)

Durability: At least Multiverse level+ (Was forged from the essence of the Source Of All. Master Mogul can effectively use it as a weapon)

Start a Discussion Discussions about Sword of Acorns