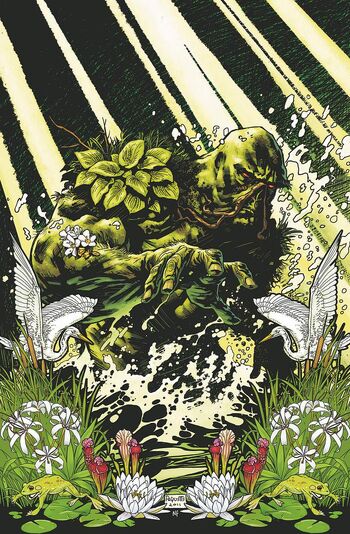 Swamp Thing is an elemental creature who shares a connection to all plant life on the planet Earth through a network called the Green. He is a mass of vegetable matter that absorbed the memories and personality of Alec Holland, a botanist who died in a swamp shortly after creating a hormonal Bio-Restorative Formula for plants. He is associated with the Parliament of Trees and the White Lantern Corps. This profile is for the New 52 / Post-Flashpoint version of the character.

Powers and Abilities: Superhuman Physical Characteristics, Immortality (Types 1, 3, and 8), Regeneration (Low-Godly, Capable of Regenerating even if his existence is destroyed as long as The Green exists), Reality Warping, Causality Manipulation (Fixed Post-Crisis Supermans' flawed connection with the Post-Flashpoint Reality, which was causing a disturbance in The Green), Plant Manipulation (Holds absolute control over every kind of Plant Life on the entire universe), Elemental Manipulation (Earth Manipulation, Water Manipulation, Air Manipulation), Shapeshifting/Sizeshifting (Can assume any form he desires, even growing as large as an entire landmass, or shrinking to a quantic level), Weather Manipulation, Soul Manipulation, Flight, Teleportation (Through Degenerating and then Regenerating himself on another location), Duplication/Creation (Can create many clones of himself and inhabit multiple bodies at once), Cosmic Awareness (Through The Green), Summoning, Poison Manipulation

Attack Potency: Solar System level (Is The Green's Ultimate Avatar, destined to fight against The Rot, a force so powerful that in an alternate future they defeated and zombified almost every single Metahuman on Earth. Easily defeated the Machine Parliament's Avatar. Overpowered Superman and fought Wonder Woman. Sliced Rotling Starro in half. Far above Aquaman, Etrigan and Zatanna)

Lifting Strength: Unknown (Varies in accordance to his body's size)

Durability: Varies. Solar System level at its strongest (Has survived blows from a bloodlusted Wonder Woman, Aquaman, and Superman without having to regenerate)

Range: Planetary. Multiversal+ through The Green

Weaknesses: Can have his connection to The Green cut off