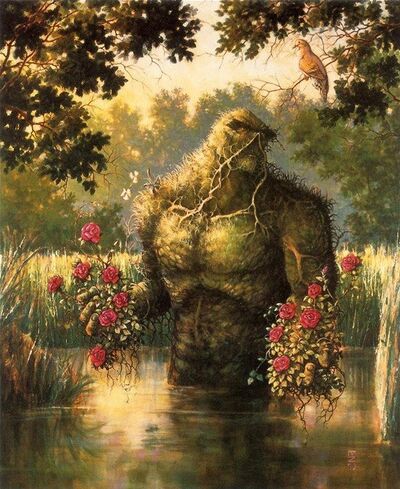 In a secret facility located in the Louisiana swamplands, scientist Alec Holland and his wife Linda invented a Bio-Restorative Formula that would solve any nations' food shortage problems. Ferrett and Bruno - thugs working for Nathan Ellery - barged into Alec's lab, knocked him out, and planted a bomb in the facility. Alec woke up just as the bomb exploded, and in flames, he ran into the swamp.

His body had been drenched in the bio-restorative formula, and this affected the plant life of the swamp, imbuing it with Alec's consciousness and memories. The newly conscious plant life formed a semblance of a human form and rose up from the bog as the Swamp Thing, the latest in a long line of Earth elementals created when The Green needed protection.

The monstrous Swamp Thing can control every iota of plant life on this planet, from the fungus on stale bread to forests of towering oaks. Superhumanly strong and grotesque, he can grow himself a full array of titanic bodies from even the tiniest sprout of green. A living embodiment of the power and terror in our environment, the Swamp Thing protects both humanity and the environment—usually from each other.

Superhuman Physical Characteristics, Self-Sustenance (Types 1 & 3), Non-Corporeal (His consciousness can exist without his body. His mind is a function of his astral body, and isn't linked to his brain), Nigh-Omnipresence (Had become the world. His soul is one with the entirety of The Green), Immortality (Types 1, 2, 3, 6 & 8. Reliant to The Green as well as his connection to it), Can reconnect to The Green after having his connection with it cut off, Reality Warping, Regeneration (High-Godly. Had his body completely destroyed, and the Multiverse he inhabited collapsed, but his essence survived, went into another universe and grew a new body for him there), Possession (Can possess singular seeds and grow new bodies through them anywhere on the world, in other planets light-years away, in other points in time, and even if the Multiverse collapses. Can also take control over someone else's body and possessed Constantine), Extrasensory Perception (Is aware of what goes on around him through the Green. Can sense all plants on the globe. Can sense alteration on the Green down to a sub-molecular level. Can sense all life on the planet at once and see through their eyes. Can easily locate anyone on the planet. Can sense when beings enter Earth from other planets), Body Control & Natural Weaponry (Can manipulate his body in many ways such as growing a third hand from another place, grow spikes or generete a blade in his arm), Body Puppetry (Took control of Constantine to make him walk after he passed out), Flight (Can create his own wings to fly. Can naturally fly as his soul/mind or when using certain elements as his body), Plant Manipulation (Holds practically absolute control over all plant life across the Universe and also holds some control over Fungus), Sleep Manipulation (Used acids to make Pre-Crisis Superman fall asleep), Matter Manipulation (To the point of manipulating the vibration of Quantum-Strings), Shapeshifting/Sizeshifting (Can alter his form into practically anything he desires including growing as large as an entire landmass, or shrinking to a quantum level, or existing solely as electromagnetic frequencies), Elemental Manipulation (Fire, Earth, Water, Air, Magma, Electricity and Ice Manipulation. Has complete control over Fire, Earth, Water and Air, the elements that make up Creation. Can reshape mountains, possess an area of land, cause earthquakes, give life to stones and gain control over Earth as a whole. Can access The Melt and The Blue, which connect all magma and water in the same way The Green connects all plant life. Has control over all water on Earth. Can communicate through fire. Can summon lightning and create electricity from his hands. Can freeze blood inside a person), Weather Manipulation (Can create thunderstorms), Intangibility (Elemental, albeit never used to phase through stuff. Can make bodies out of elements such as water or clouds), Life Manipulation (Gave life to a stone), Transmutation (Manipulated the flora in someone's gut to turn him into a tree), Creation (Created a body which looked like his wife, a new body for Anton Arcane and an entire town filled with people), Biological Manipulation (Made a human target explode without having to touch it. Can alter the chemical balance in someone's brain), Acid Manipulation (Dissolved a rock monster with acid), Sound Manipulation (Can build air conditioning and make music with his plants), Planetary Telepathy (Can read mind by touching the Green as well as accessing someone's memories. Can communicate with others telepathically. Read the memories of a dead child. Can read the memories of a book as its pages were once a tree), Empathy Manipulation, Mind Manipulation (Can use his plants to make others act primordially. Invaded Aquaman's mind. Influenced Killer Croc into going to his swamp), Memory Manipulation (Can place memories into fruits so whoever eats them will be able to recall these memories), Perception Manipulation (Can release a chemical which makes the opponent have hallucination. Can create plants that allow those who eat them to see the world as he does), Blood Manipulation & Death Manipulation (Can manipulate the human bloodstream, can freeze blood inside a person, dry out their cranial fluid, burst a person’s heart or instantly dehydrate them), Vibration Manipulation (Can control vibrations), Teleportation/BFR (Can teleport others through the Green), Time Travel (Accidentally time travelled to WWII & 1872. His astral form can travel through the timestream. Talked about his potential to time travel along with other things), Dimensional Travel (His essence can jump into another universe and create a new body for him there), Astral Projection (Can enter the afterlife), Soul Manipulation/Stealing, Magic, Duplication (Capable of creating multiple bodies for himself, and controlling all of them at once), Healing/Resurrection (Can heal any wound or disease, and revive the dead), Technology Manipulation (Can take control over technology), Absorption & Holy Manipulation (Absorbed wood from the Garden of Eden, and used it to create an armor to protect himself from demons. Can absorb Memory), Stealth Mastery (Sneaked up on a soilder), Animal Manipulation (Released a plague of insects upon Gotham City), Information Analysis (Can scan others), Purification (Resisted an entity seeking to possess him and casted it out), Can bypass virtually any barrier or forcefield (By shifting his strings' vibrations he was capable of passing though The Source Wall), Resistance to Cosmic-level Magic, Possession (Resisted an entity seeking to possess him and casted it out), Pain & Heat Manipulation (Doesn't feel pain anymore sence he became Swamp Thing. Resisted heatwaves), Existence Erasure (Had his body completely destroyed by the Anti-Monitor's wave of anti-matter but his essence survived), Immunity to Time Manipulation (Exists in a stable Time Loop) and Aquaman level Telepathy. Formerly possibly Death Manipulation as a Black Lantern

Attack Potency: Low Multiverse level (Described as being one with the World / Universe multiple times, and holds control over the forces that make up Creation. Fought and defeated Anton Arcane when, according to the Monitor, the latter had become as powerful as Trigon and the Spectre (Jim Corrigan)). Multiverse level+ at Full Power (Easily warped and remade the entirety of the Green with a hand gesture, the Green being a metaphysical realm connected to all separate timelines of Creation, and which was unaffected by the collapse of the Pre-Crisis Multiverse) | Low Complex Multiverse level (Exists as a Higher-Dimensional Conceptual Being beyond all creation and all Metaphysical Parliaments), possibly far higher (Was said to be comparable in power to The Voice. The Word said that he nearly replaced God)

Durability: Unknown (Usually capable of being damaged by low-level weapons and attacks), regeneration, immortalities and possession makes him very hard to kill, which was demonstrated when he took an attack from The Anti-Monitor, got his body completely destroyed and survived by merging his essence with The Green, and creating a new body somewhere else) | Low Complex Multiverse level

Weaknesses: Mentally Blocks himself from using his full power. Needs the Green to survive, if it is destroyed in all the universes it exists in, Swamp Thing will cease to exist. Pollution. | None notable