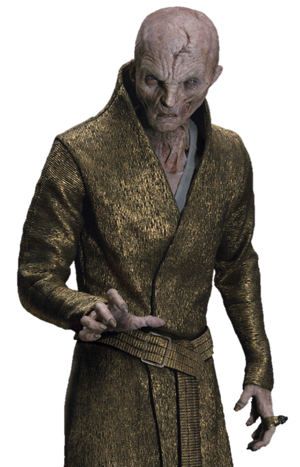 Snoke is one of Darth Sidious' avatars. He is the leader of the First Order.

Age: Unknown, though stated to be a few centuries

Attack Potency: Large Town level (Was capable of overpowering Rey with ease, who in turn could stalemate Kylo Ren)

Durability: Unknown naturally (It has been stated that his true body is extremely frail and weak). Large Town level with Force Amplification

Range: Galactic. Telekinetically ragdolled General Armitage Hux, who was in the Ileenium System, from somewhere in the Unknown Regions. Was able to mentally link Rey and Kylo Ren using the Force.

Standard Equipment: Gold ring inscribed with glyphs of the Four Sages of Dwartii and also encrusted with obsidian from Darth Vader's castle on Mustafar.

Intelligence: Very high (Snoke is a master schemer and manipulator and a ruthlessly cunning leader. Under his leadership, the imperial remnants which formed what came to be known as the First Order amassed a vast enough army and fleet to pose a threat to the galaxy at large and also improved greatly on existing imperial era technologies. He brilliantly manipulated the politics of the galaxy; gaining the support of many a New Republic Senator, weakening the New Republic Senate via helping to move imperial sympathizers into positions of influence, helping shatter the political careers of many notable New Republic leaders opposed to the First Order, etc. He was able to manipulate a powerful Force sensitive such as the likes of Ben Solo, whom Luke Skywalker considered a "chosen one" of sorts and potentially the future leader of his new Jedi Order, into turning to the Dark Side)