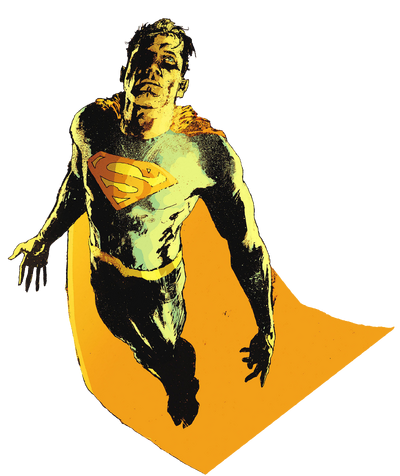 Landing on Earth in the early 20th century, Kal-El of doomed Krypton was raised in Kansas as Clark Kent, and grew up to become Superman, Earth's greatest hero. His powers grew over time, and as his existence changed his adopted planet's destiny and he outlived all around him, he was sometimes reminded of his original failure: his inability to save the starship Phaethon in 1939, the year after his public debut. He ultimately learned courtesy of Mister Mxyzptlk that the ship - having been powered by Red Kryptonite - had in fact been phase-shifted to a dimension dangerous for even Mxyzptlk to access. By the end of time when the final god died, Superman, who had single-handedly held back the entropic decay of the universe with only a fraction of his power, used his own now transdimensional capabilities to reach the Phaethon, and journeyed with its now-revived crew into the end of reality and the birth of a new universe, swearing that whatever they encountered, he would stay with them no matter what.

Stamina: Nigh-Infinite (Without sleep he was exerting himself for billions and billions of years holding the universe together)

Intelligence: Extraordinary Genius (Comparable to at least his Post-Crisis self, and seemingly had knowledge that even Mr. Mxyzptlk was unaware of)