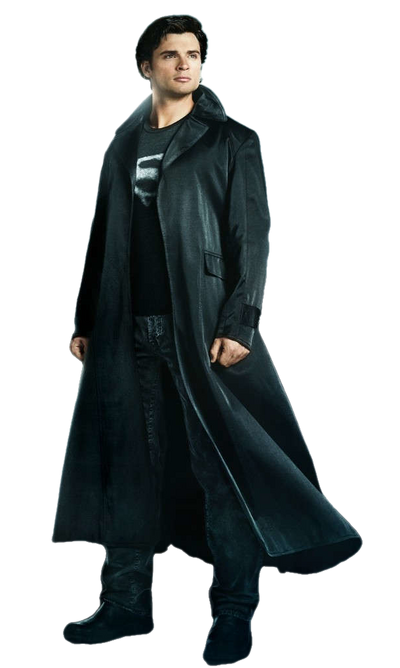 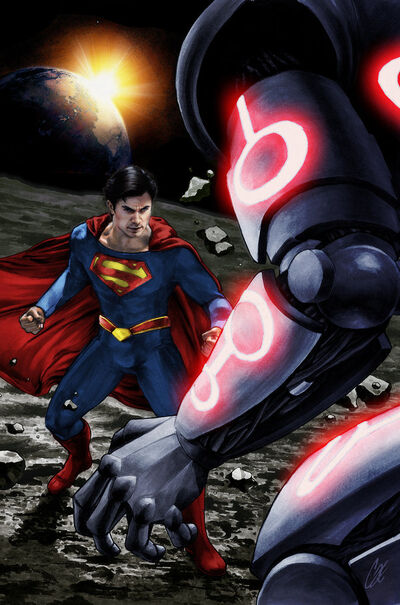 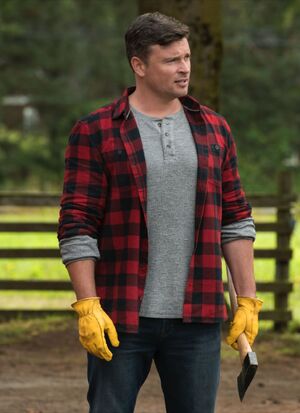 Clark Kent, aka Superman, is Earth's greatest hero and the main protagonist of Smallville. Hailing from the planet Krypton, Clark is an alien born as Kal-El, sent to Earth by parents Jor-El and Lara to escape Krypton's destruction, and in the process become a guardian of the planet Earth. Accompanied by a massive meteor shower, his spaceship crash-landed in Smallville: there, he was found by farmers Jonathan Kent and Martha Kent who raised him as their son, instilling in him strong moral principles and teaching him to use his abilities for good.

Thanks to the yellow sun, Clark developed many Kryptonian powers that grew stronger as he got older, learning much about his origins from Dr. Virgil Swann, and an artificial intelligence replicating Jor-El. Clark secretly fought crime around his hometown during his high school years, and after moving to Metropolis in adulthood moonlit as a vigilante initially known as the Good Samaritan, then as the Red-Blue Blur, and then simply as the Blur, before assuming the identity of Superman to save the Earth from the forces of Darkseid and Apokolips. By day, he works as a reporter at the Daily Planet and manages his family's farm.

Powers and Abilities: Superhuman Physical Characteristics, Martial Arts | Superhuman Physical Characteristics, Flight, Super Hearing, Telescopic Vision, Microscopic Vision, X-Ray Vision, Heat Vision, Super Breath, Freeze Breath, Telekinesis, Regeneration (Low-Mid. Healed quickly from being stabbed through the chest), Immortality (Type 1. It was stated that he would live forever.), Is not affected by alcohol, Can Thunderclap, High Resistance to Electricity Manipulation (Resisted Jeremy Creek's electricity), Heat Manipulation/Fire Manipulation (Was unaffected by Heat Vision from Supergirl, has walked through flames, and survived being tossed into a furnace.), Molecular Manipulation, Telepathy, Ice Manipulation (Naturally thawed out from being frozen. Later on was unharmed by being frozen, and quickly broke free from the ice), Disease Manipulation (Was never sick until he lost his powers.), Deconstruction (Withstood an ability, that easily turned others into dust.) Mind Manipulation, Reality Warping, Time Manipulation, and Existance Erasure (Resisted the Bleed's attempt to erase him from history as well as Darkseid's Omega Beams), and has additional powers in special circumstances including Telepathy, Precognition, and Matter Manipulation | All previous, Invisibility, Intangibility, Energy Constructs, Willpower Manipulation, Matter Manipulation, Limited Reality Warping and Time Manipulation, Forcefields and Automatic Shielding, Illusions, Healing of himself and others, Can steal speed from others to increase his own, and Weather Manipulation

Speed: Supersonic (Kept up with Green Arrow, who easily dodged bullets) | High Hypersonic+ | Massively Hypersonic+ (Moved, and can react, at Mach 1583.5. Can run from Kansas to Honduras in 10 seconds) | FTL (Outran a camera flash, and is swifter than Kara and Brainiac who performed this feat, and was mentioned several times to be faster than the speed of light) | Massively FTL+ (Was able to react, and move before the Green Lantern ring reached him, which moved across Galaxies in minutes. Faster than Green Lanterns, who can travel across the universe in minutes) | Massively FTL+ (Green Lanterns can fly across the universe in a short period, comparable to Bart Allen in speed)

Durability: Wall level (Survived being tossed into a metal generator) | Small Building level (Tanked being within a truck as it exploded, which should come out to 0.0356106597 tons of TNT. Clark stated he barely felt it) | City Block level | Continent level (Withstood hits from Baern, who absorbed the Black Box which generated richter scale 6 earthquakes around the planet which would yield energy in this tier) | Dwarf Star level (Tanks attacks from comparable opponents) | Dwarf Star level

Intelligence: Extraordinary Genius (Is an excellent reporter, and is a master combatant, who is capable of defeating soldiers, martial artists, and aliens without powers, he is capable of using advanced Kryptonian tech, and can learn new languages in incredibly short periods. His intelligence is on par with Lex Luthor and other geniuses, learned how to use the Monitors' technology with a glance, and has outsmarted and outmanoeuvred masters of war and strategy.)

Weaknesses: None notable | Kryptonite (various types), Red Sun, Magic (not a true weakness but it bypasses some of his natural resistance to injury, allowing it to harm him more easily), solar flares | With his Green Lantern ring, Yellow Lanterns weaken him immensely

Note: He has some abilities that appear randomly like Precognitive dreams, which are never explained, and his Telepathy was given to him by Jor-El. His telekinesis appeared first when his powers were unlocked by Jor-El, and several Kryptonians were shown to possess Telekinesis.

Brandon Breyer (Brightburn) Brandon's Profile (Both were at 9-B, Speed Equalized)

Frieza (Dragon Ball) Frieza's Profile (Clark was in his Full Power Unlocked key and Frieza was restricted to his First Form. Speed was equalized)