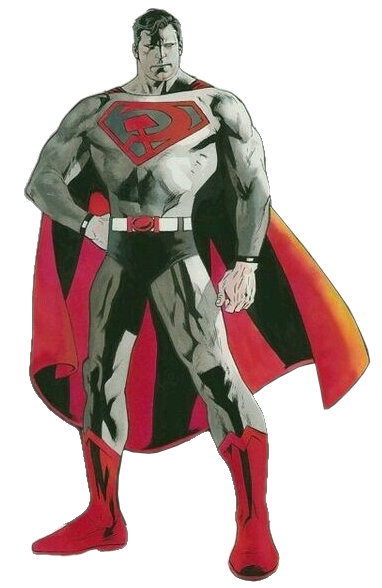 A strange visitor from another world with powers and abilities far beyond those of mortal men who, as champion of the common man, fought a never-ending battle for Stalin, communism, and the international expansion of the Warsaw Pact. Defending Earth from innumerable threats and coming to govern most of it, he eventually came to the conclusion - in large part thanks to his old arch-nemesis, American scientist Lex Luthor - that his presence was stunting societal growth, and allowed it to believe he had perished after saving it from a black hole bomb. Assuming a normal identity, he watched with pride as humanity achieved all he had dreamed of it.

In a twist ending, he was shown to not stem from Krypton, like his mainstream counterpart, but rather from an evolved far future human civilisation, sending him back in time from a doomed Earth, and causing a temporal paradox.

Attack Potency: Planet level+ (Can exchange blows with supermen comparable to himself. Broke through a Green Lantern construct made up of countless micron-thin layers. Exchanged blows with Bizarro, a clone of himself, who could harm him. Briefly held back Monarch with help from other Supermen)

Striking Strength: Planet Class+ (His punches can harm Bizzaro, a clone of himself)

Durability: Planet level+ (Survived an explosion that was this strong. Survived attacks from Monarch, who claimed he could destroy various iterations of Earth with his own strength)

Intelligence: Extraordinary Genius. Learned English in 10 minutes. Single-handedly manages the global economy. Swiftly calculated how many people identified as communists on the planet. Could analyse and figure out the mechanisms of dimensional teleportation technology.