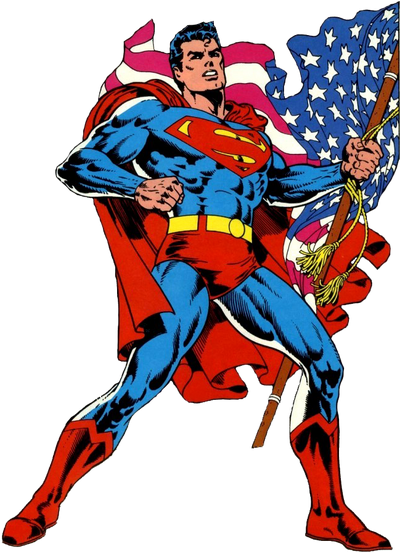 Attack Potency: Low Multiverse level (His clash with Jaxon the Mighty generated enough energy to counter the combined power of the future Green Lantern Corps, which destroyed multiple timelines[1]. Pushed himself toward the center of the big bang and destroyed a structure that was withstanding it.[2] Comparable to the original Captain Marvel, who defeated the Invincible Man) | Unknown (Far more powerful than before[3])

Speed: Massively FTL+ (He could cross the universe in seconds, and the multiverse in minutes[4], tied in a running race across the galaxy against the Flash, and flew to a long dead universe in seconds to safely sneeze[5]). Immeasurable by flying through time. | Omnipresent

Durability: Low Multiverse level (Withstood multiple hits from Jaxon the Mighty, who was his equal in terms of raw power) | Unknown

Stamina: Incredibly high, but he has been shown to tire when fighting comparable opponents

Standard Equipment: None notable | The Sword of Superman

Intelligence: Extraordinary Genius (Smarter than supercomputers, could build advanced robots and technology, vast knowledge about aliens and the universe, could understand all languages) | Nigh-Omniscient

Weaknesses: Superman is subject to Kryptonite, magic, red sunlight, and he cannot see through lead | None notable

Key: Regular | With The Sword of Superman

Ness (Earthbound) Ness’s Profile (Ness is at Low 2-C, Superman is at 2-C without the sword. Speed is equalized. The battle takes place in Ness’s Magicant.)